John Wall says not having his mom and Wizards fans at D.C. return was ‘difficult’

Wall says not having his mom and fans at D.C. return was 'difficult' originally appeared on NBC Sports Washington

While we all watched John Wall return to Capital One Arena for the first time as a visitor on Monday night, as he darted up and down the floor and squared off with former teammate Bradley Beal, Wall couldn’t help but focus on who wasn’t there.

Yes, this was a reunion between Wall with the city and organization he played 10 years for. But the people who made that time special for him were not in attendance, as fans remain prohibited from games due to restrictions amid the coronavirus pandemic.

“I’m an emotional and passionate person. I’ve been here for 10 years, so you know I wanted to see those guys here and see them here to support me. It definitely was difficult.”

Wall did, however, feel some emotions from being in the arena he created so many memories with his family over the years. His mother, Frances, passed away in December of 2019, while he was out recovering from a ruptured Achilles tendon.

“She’s been here with me for everything. Knowing she’s not here, that was difficult. She would probably in Row 10, Section G, or front row if she was feeling healthy,” Wall said.

“I didn’t have the opportunity to have that. But I know she’s watching down on me and very proud of me and the comeback I’ve had.”

This game against the Wizards didn’t go nearly as well for Wall’s Rockets as the first one did. Back in January, the Rockets beat the Wizards by 19 points. This time, the Wizards won by 12 and led by as many as 18.

That spoiled Wall’s 29 points and 11 assists. The Rockets have now lost six straight games, while the Wizards have won their last two.

Wall, though, was ready to turn the page from this game and his time with the Wizards. In his postgame press conference, he said he doesn’t want to talk about the trade and what led to his end in Washington anymore.

He’s looking forward and already has plans for the next time he plays in D.C. With the hope fans will be allowed, Wall plans to buy tickets for those who were there for his early days, including arena workers who are no longer employed.

“If I have the opportunity when I come back next year, if we can have fans, I definitely want to get those people in the stands. So, I will look forward to buying a lot of tickets for the people who have looked out for me and helped me grow up to be who I am today and let them know that I haven’t forgotten about them,” he said.

Tune in to NBC Sports Washington at 7 p.m. on Wednesday for full coverage of the Wizards’ next game against the Denver Nuggets. 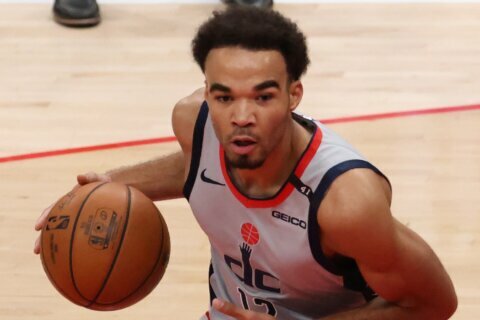