Why the Wizards, NBA are betting big on esports

The NBA is buying big into esports. But can the league capture the grassroots energy created by some of the biggest games for its own title, NBA 2K?
Listen now to WTOP News WTOP.com | Alexa | Google Home | WTOP App | 103.5 FM
(1/3) 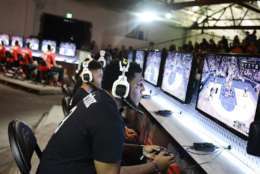 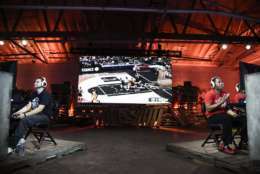 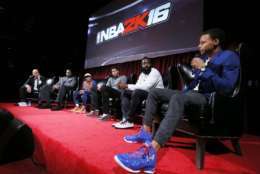 WASHINGTON — Bear with me.

To those who still haven’t gotten their heads around the popularity or even the existence of esports — people watching other people play video games — the idea that a major American professional sports league is actually forming teams of video game players to compete on an international stage might leave them incredulous. But that’s exactly what the Washington Wizards and 16 other NBA teams are doing this winter, when they will try out and draft the top 85 NBA 2K players in the world for a league that will compete this summer.

These players will not compete in the way that you might expect, though. Rather than controlling a whole team, switching between players on the screen, they will compete 5-on-5, with 10 individual users working in concert. To qualify for the March draft, players must win 50 games in the Pro-Am, 5-on-5 mode, during which time they will accumulate not just basic stats, but a wealth of information about their shot release, their passing accuracy, and a host of other skills that will be used to determine their rank. They will be drafted to the teams in the 17 markets, where they will move in and be housed together, train together, be paid a salary, and compete under the NBA banner.

For traditional sports fans, this begs the first and most crucial question of esports: Why would people want to watch other people play video games? The answer lies in the shared community that grows around playing the games and the appreciation of those who rise to the top, much like more traditional sports. But esports is growing in popularity and drawing in consumers at a rate that traditional American sports leagues would kill for.

Depending on which study you believe, between 61-81 percent of esports watchers are 18-34; they are 77-83 percent male; their average annual income is somewhere between $65,000-$76,000. No matter which end of any of these ranges the truth lies, this puts the majority in a highly sought-after advertising demographic and underscores the sudden corporate interest in this section of the gaming world.

This is also not some small, niche spectator market.  A recent League of Legends tournament drew a live crowd of 55,000 people to a stadium, with another 100 million watching online, most via YouTube and the digital streaming service Twitch. Over 650 million people will watch gaming videos online this year, making its audience bigger than HBO, Netflix, ESPN and Hulu. Combined.

“It will dwarf the NFL. It will dwarf the NBA,” said Monumental Sports & Entertainment owner Ted Leonsis at this week’s Esports & Wizards NBA2K Global Summit, hosted on the Washington Wizards’ practice floor inside Capital One Arena and broadcast globally. “Because, first and foremost, it’s a global phenomenon.”

The recent Dota 2 Championship took place at Seattle’s Key Arena in August. In addition to the more than 17,000 spectators packing the stands, another 10,000 stood outside to watch on the big screen. But the most eye-popping number was the payout. A cash purse of $25 million was raised through in-game purchases — players making millions of small transactions for virtual upgrades — functioning as a sort of crowdfunding effort. The winners, Team Liquid (partially owned by Monumental Sports), took home $11.8 million.

The question for Leonsis and the NBA is whether or not they can successfully tap into that market. The hope is that the official endorsement, support and structure from the NBA will help NBA 2K grow into a larger and more well-supported esports community. But this is something of a reverse engineering process from the way these games’ communities usually develop.

To this point, esports fandom has been organic, communities self-organizing around a shared, found interest. While the desire to tap into such an energy is understandable, the question of whether or not it can be manufactured has yet to be answered.

“Esports are not born overnight,” Zach Leonsis, general manager of Monumental Network, told WTOP. “They are typically born out of an organically forming community that rapidly grows and evangelizes the title, and they’re formed after the fact.”

Leonsis understands that corporate buy-in will likely fuel skepticism from the community. He and the Monumental team spent more than a year interviewing dozens of people on every level of the esports ecosystem — game publishers, tournament organizers, media networks, players, associated brands, and investors — before deciding on their NBA 2K investment.

“This community can really sniff out disingenuous money grabs. They’re serious about their games, they’re passionate, and they want their games to be in great hands. So I really feel like we have this responsibility at the birth of a brand new industry to be very, very good actors and we intend to do so,” he said.

They’ve got some catching up to do to reach the popularity of the big boys. Of the nine million users who have purchased NBA 2K in the U.S., 1.6 million play every day. An additional 35 million users have downloaded a free version of the game in China. But on Twitch, NBA 2K only has about 375,000 followers, compared to more than 4 million for Overwatch, better than 5.2 million for Counter-Strike and more than 6 million for League of Legends.

“That’s one of the great things about esports, is that you’re driving huge, huge engagement with the viewers,” said Leonsis. “I think it really creates this spinning up effect of more and more people watching.”

Brendan Donahue worked with NBA teams and the league office for years on the sales and marketing side, but made the jump to become Managing Director of the NBA 2K League. He believes in the rising tide of esports; the boom provides his faith in the success of NBA 2K.

“It’s the fact that esports is exploding. It’s doubled in size over the last couple years. It’s expected to double in size again in the next couple of years. There’s no sign of it stopping anytime soon,” he told WTOP.

Jens Hilgers has been on the ground floor of the esports movement. Founder of the Electronic Sports League, which organizes competitions around the world, he was invited to speak as part of the Wizards’ NBA2K Global Summit. And even though Hilgers has seen it all in the esports landscape, the NBA 2K gamble is still something new for him as well.

“NBA 2K is a pretty special esport, in the sense that it is a continuation, or kind of the reutilization of existing sport as esports,” Hilgers told WTOP. “That is quite different from how the vast majority of other esports have looked so far.”

Donahue sees this as an advantage. During the presentation, he pointed to his own personal exposure, weekends spent with his son playing video games. Notably, his son was introduced to the NBA and its stars through NBA 2K, rather than the other way around.

“The kids are sort of getting exposed by the game first, then they discover that there’s this ecosystem in the real world,” said Hilgers. “This is an interesting aspect, I think, which has special characteristics. But once again it’s unlike what you see in terms of the most successful esports.”

To that end, sports video games present another fundamental quandary that has yet to be fully resolved. You can’t watch a real life version of mythical creatures battling, as are depicted in League of Legends, as you can’t watch World War II battles taking place, as they exist in Call of Duty. But sports have real-life counterparts, providing actual drama. Why would a consumer watch someone play NBA 2K when they could just watch actual NBA players playing real basketball?

“There is the beauty of a spectator having easy access to the game, because he knows basketball, but it also poses the challenge that he just switches the channel and there are the NBA guys playing, right?” said Hilgers. “How will that play out? I think that will be an interesting dynamic to follow. I don’t have the definite answer.”

Nobody really does. This is uncharted territory for everyone involved.

“How will that play out? I don’t have the definite answer.”
— Jens Hilgers

One key disconnect in explaining what this eports landscape will look like to those versed in traditional American professional sports is the in discarding the assumed permanence of the enterprise, or the idea that such a thing is even part of the goal. There are games like Counter-Strike and League of Legends that have been stable and successful for a number of years, but they are more the exception than the rule.

“The biggest skill of esports organizations is pick a winning game, build it up to a successful franchise, but also know when to shut it down,” said Hilgers. “This is also different from picking up a basketball franchise in the U.S., where you’re not even thinking about shutting that down ever. That would be a lifetime activity, and basketball you perceive as not going to die.”

Nevertheless, both Donahue and Leonsis are confident in NBA 2K’s existing audience and the league’s ability to use that as a springboard to greater heights.

“I think the fact that we’re the NBA gives us a significant advantage in terms of being the one-stop shop for competitive basketball gaming,” said Donahue.

Is he worried about the popularity fading, or that a competing game might grow up organically and overtake NBA 2K in popularity?

“That’s not even a thought in our head, of another basketball game being created that’s going to be able to compete with NBA 2K.”

Leonsis has faith that the foundation of the relationship between the developer and the league will provide the solid base this experiment needs to succeed.

“Why this opportunity, I think, can work being stood up quickly is because there is already a significant 2K fan base out there, but it’s an instant alignment between the two most important partners out there between the publisher, Take 2 Interactive, and the NBA,” he said.

“If the NBA and Take 2 can’t make this game into a relevant esport, I’m not sure who could.”