With RB position unsettled, Redskins get first look at Peterson

The depleted Washington backfield got a jolt of star power with the addition of Adrian Peterson, but how much can the veteran be expected to contribute?

WASHINGTON — The Redskins did not hide the fact that they needed to improve the running game this offseason. They finished 28th in the league in 2017 with an average of just over 90 yards per game on the ground and a 3.6 yard-per-carry average.

Now, it may be on Adrian Peterson’s shoulders to change that.

The team went out and drafted Derrius Guice in the second round, hoping to jumpstart the ground attack. They entered training camp with six running backs, five of which were 100 percent healthy, and Chris Thompson, who was still working his way back from a broken leg last year.

After two weeks of the preseason, Rob Kelley and Kapri Bibbs are the only two left standing.  Byron Marshall and Samaje Perine could miss extended time after suffering injuries in last week’s preseason win over the Jets. Rookie Martez Carter was also injured last week, and the team released him with an injury settlement this week.

The plan all along was to hold Thompson out of the preseason as he works his way back.  He’s been running and practicing all of camp, but was to receive no game action until the opener in Arizona.

So the team had to go get a running back or two to help finish the preseason.

Senior Vice President of Player Personal Doug Williams made it clear why Peterson was chosen.

Now, coming in and working out for a team isn’t unheard of, especially this late in camp, but Williams noted the difference with someone of Peterson’s pedigree.

“I think the average guy that has accomplished what Adrian has accomplished probably would feel like, ‘I don’t have to work out. You sign me.’ But he didn’t come in here with that attitude. I think it shows you the person he is, that he has humility, and he realized he wanted to play.”

The key now is to get Peterson up to speed and see if he does have anything left in the tank is and able to help this team. The Redskins have two weeks to decide that, beginning with Friday night’s game against Denver. Contracts are not guaranteed in the NFL until a player is on the final roster come Sept. 1. So, if the team decides that Peterson can’t play or contribute, then they can cut at no cost.

It’s a no-risk and a potentially big reward move for the club. Redskins head coach Jay Gruden will have to decide how to evaluate him based on limited reps during his first game action on Friday night.

“I think you [can] tell by the whole body of work that he has put on throughout his career,” he said. “I think the big thing you try to see on the first seven [to] eight carries is getting out of the huddle, having the plays register in his mind, how quickly he can adapt to our audibles. And all that goes into an offensive game plan. So, trying to give him a feel for the quarterback, snap count, our linemen, our blocking schemes, but as far as viewing him as a player, and what he can do, I think the most important thing is just in the system, what he can do.”

With the arrival of Peterson, there are still a number of questions that the coaches still have to answer: Can Peterson contribute? How serious are the injuries to Perine and Marshall? When everyone is healthy, who is the odd man out once the final roster comes out?

There are two weeks left to try and figure all this out.

As far as the other starters on Friday night, Gruden said that they are all preparing to play, but he wasn’t sure how long they would play. The third preseason game represents the closest thing to a regular season game. Starters typically play the whole first half.

The preseason will finish next week in Baltimore. 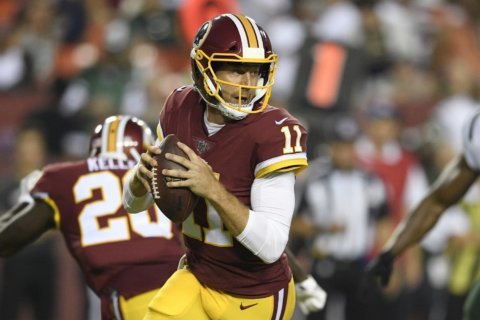 Redskins, Ravens worth considering for your 2018 fantasy football team