Francisco Lindor and the New York Mets geared up for the playoffs with a 9-2 rout of the Washington Nationals on Wednesday, completing a fantastic regular season with the second-most wins in franchise history.
Listen now to WTOP News WTOP.com | Alexa | Google Home | WTOP App | 103.5 FM
(1/7) 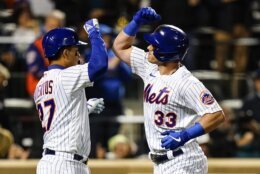 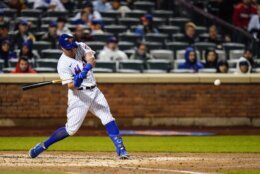 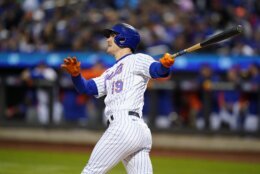 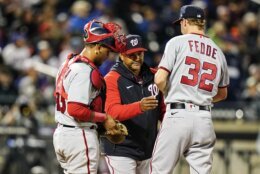 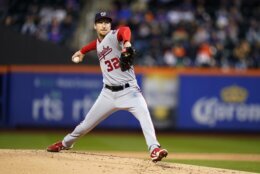 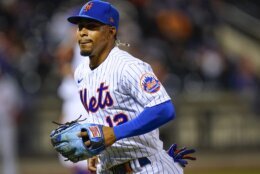 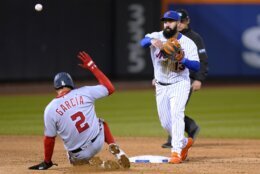 NEW YORK (AP) — After wrapping up a 101-win season with an easy romp, the New York Mets know their next challenge will be much tougher.

Francisco Lindor and the Mets geared up for the playoffs with a 9-2 rout of the Washington Nationals on Wednesday, completing a fantastic regular season with the second-most victories in franchise history.

Up next is a best-of-three wild-card series at home against San Diego beginning Friday night. Max Scherzer is scheduled to start the opener for New York versus Yu Darvish.

New York went 2-4 this year versus the Padres, who won two of three at Citi Field in July.

McNeil won the major league batting crown without taking a swing, and New York (101-61) finished with the same record as the Atlanta Braves atop the NL East. The defending World Series champions clinched the division title Tuesday because they held the season-series tiebreaker after going 10-9 against the Mets.

The only Mets team to win more regular-season games was the 1986 World Series champions at 108-54.

Lindor hit a three-run double to make it 6-0 in the second inning. He left the field to a warm ovation from fans in the eighth.

“Now, this is the best time of the year,” Lindor said. “I want to give them a lot to cheer.”

Even speedy Terrance Gore got in on the fun with a single for his first major league hit since July 4, 2019, with Kansas City. He’s won two World Series rings since then as a pinch-runner deluxe with the Dodgers and Braves.

Williams (3-5) entered in relief to start the second and allowed two runs in six solid innings with six strikeouts and no walks.

After the first pitch was delayed nearly two hours by rain, Washington starter Erick Fedde (6-13) gave up nine hits and a career-high nine runs in 2 1/3 innings.

“It felt like it happened pretty quick,” Fedde said. “I’m bummed that I didn’t execute pitches a little better and get some outs, and especially eat some innings today after a long day yesterday. Not a lot went right today.”

It was a fitting finish for the rebuilding Nationals, who had the worst record in the majors at 55-107 and will get the No. 1 pick in the amateur draft next year. They were 65-97 last season.

“Our season’s over right now, for the players. But the work is just beginning for myself, (general manager Mike Rizzo) and the front office,” manager Dave Martinez said. “We’ve got a lot of work to do. I’m looking forward to this winter, getting things done, and then getting ready for spring training.”

Nursing a four-point lead in the big league batting race, McNeil was not in the starting lineup. He entered on defense in the eighth but did not come to the plate and finished with a .326 average that was the highest in the majors — one point ahead of Freddie Freeman after the Los Angeles Dodgers star went 3 for 4.

“It just means a lot,” McNeil said. “It’s always better to do it on a good team.”

Nationals: SS CJ Abrams had an MRI on the left shoulder he hurt diving for a ball. The team was still awaiting results before the game. … CF Victor Robles (left calf) sat out.

Mets: RHP Mychal Givens was reinstated from the COVID-19 injured list and made his first major league start after 418 relief appearances. Givens threw a scoreless first inning and is under consideration for the postseason roster, Showalter said. … RHP Tylor Megill was placed on the IL without an injury designation, an indication the issue could be related to COVID-19. … All-Star RF Starling Marte (broken right middle finger) took fungos in the outfield but still can’t throw or swing comfortably. It doesn’t sound promising that he’d be ready for the Padres series.

Nationals: Play their first spring training game next year Feb. 25 against St. Louis and open the regular season at home March 30 vs. Atlanta.