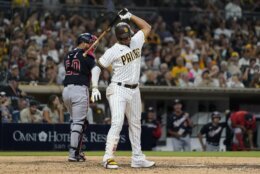 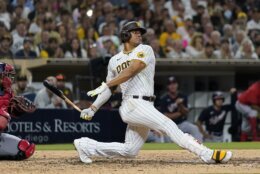 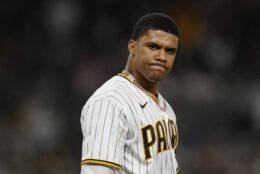 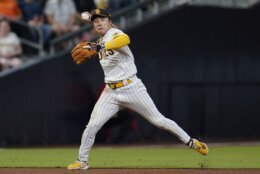 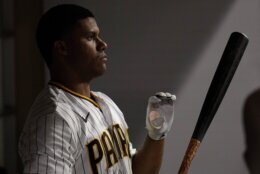 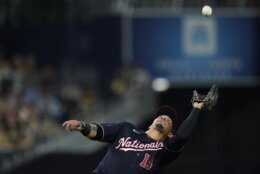 SAN DIEGO (AP) — Juan Soto of the San Diego Padres came to bat against his former team, the Washington Nationals, with the bases loaded and two outs in the seventh inning of a tie game. The sellout crowd of 41,820 anticipated something big from its new superstar.

It didn’t happen. Soto went down swinging on a 96 mph sinker from Victor Arano and slammed his bat and helmet to the ground.

That’s the kind of night it was as the Nationals, who have the worst record in the majors, won 3-1 against the Padres, who are scrapping to hold on to the NL’s third wild-card spot.

Nelson Cruz drew a bases-loaded walk off Josh Hader to bring in the go-ahead run with one out in the ninth inning on a night when there wasn’t much offense.

The big at- bat was Soto against Arano.

“It was motivational to face a hitter of that kind of caliber and able to get the job done,” Arano said through an interpreter. “I was very excited and happy to do so.”

Manager Dave Martinez said that at-bat “was a little bit trying. I was sweating a little bit. They’ve got so many good hitters in that lineup. Our pitchers have got to work. For them to come in here and do what they did, they did a great job tonight.”

Hader relieved Yu Darvish (10-7) with the game tied at 1 after the right-hander allowed two singles sandwiched around the first out in the ninth. Hader, obtained from Milwaukee on Aug. 1, hit Luke Voit with a pitch to load the bases and then walked Cruz. Keibert Ruiz followed with a sacrifice fly.

The teams staggered through the game without much offense in their fourth meeting since their blockbuster trade on Aug. 2 that sent Soto and Josh Bell to San Diego for a package of players that included Voit. The Padres had just three hits and the Nationals had just six, three of them in the ninth.

“It’s awesome. For me, this is the kind of game you want to play,” Martinez said. “This is what builds character. These guys were all jacked up, pumped up. Nobody was sitting from the seventh through the ninth inning. All those guys were standing up on the fence, cheering.”

Darvish retired the first eight Nationals batters before Ildemaro Vargas homered to right, his second. The Nationals had only two baserunners over the next five innings before starting the winning rally against Darvish in the ninth.

Manny Machado tied the game at 1 with a line shot to left off Anibal Sánchez with two outs in the fourth, his 22nd. He also extended his hitting streak to 10 games.

Carl Edwards (5-3) pitched a perfect eighth for the win. Kyle Finnegan pitched the ninth for his sixth save. Finnegan put two runners on with one out but got pinch-hitter Jurickson Profar to hit into a double play.

The Padres took two of three at Washington last weekend. This was the same pitching matchup as Saturday, when the Nationals beat Darvish and the Padres 4-3. Sánchez got a no-decision.

Darvish allowed three runs and five hits in 8 1/3 innings, struck out six and walked none.

Sánchez allowed just Machado’s homer in five innings, while striking out four and walking two. He retired the first eight Padres batters and 10 of 11 before Machado homered.

Voit became a fan favorite in his half season with the Padres and got a nice ovation as he came to the plate leading off the second.

Vargas dedicated his homer to his mother, Gaudys Barreto, back home in Venezuela. “Unfortunately because of the visas she’s unable to see me play. But when I talked to her today, she motivated me and said that I was going to have a great game. So I want to thank her and tell her that this one is for her.” 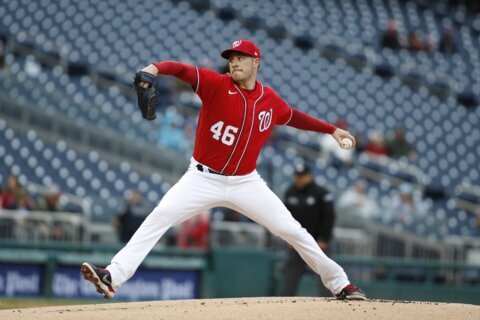 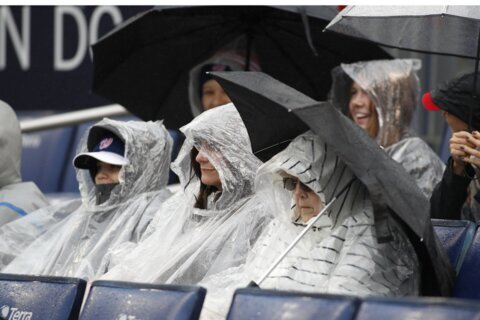