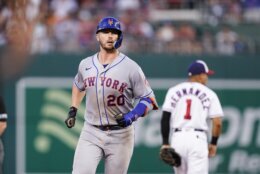 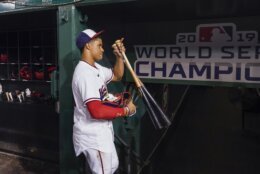 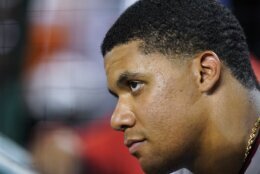 Washington slugger Juan Soto homered off Scherzer in what could be his final game with the Nationals. Soto, who walked in his other three plate appearances, is perhaps the biggest star who could be dealt before Tuesday’s trade deadline.

“I feel good where I’m at,” Soto said. “I understand it’s a business and they need to do whatever they need to do. I’m just another player, another employee here like (former teammate Ryan Zimmerman) used to say.”

Several current teammates could also leave Washington as the Nationals, who own the majors’ worst record at 35-69 and have lost four of five, look to sell for the second consecutive year.

The first-place Mets could acquire some more pieces at the deadline, but their biggest addition will likely be deGrom. The two-time NL Cy Young Award winner, shut down in spring training with a stress reaction in his right scapula, has not pitched in the majors since July 2021 and will come off the injured list Tuesday. He missed the second half of last season with right forearm tightness and a sprained elbow.

Regardless of any potential moves, New York had more than enough Monday to handle Patrick Corbin (4-15) and the Nationals. Jeff McNeil, Tomás Nido and Starling Marte all had RBI singles in the second, and Alonso lined his 27th homer into the visitors’ bullpen in left field an inning later.

Alonso’s homer was the fifth of his career against Corbin, his most against any pitcher. He is a .382 lifetime hitter (13 for 34) against the left-hander.

Lindor added a three-run drive in the sixth off reliever Steve Cishek as New York improved to 9-2 this season against Washington.

Cishek hit Lindor in the face with a pitch April 8, leading to a bench-clearing scuffle — an experience that weighed on Lindor.

“It hasn’t been comfortable since I got hit,” Lindor said. “The last at-bat against him, I struck out. Today, he hit Marte and all I was saying was, ‘Please don’t hit me.’ The first pitch was inside and it made me very, very uncomfortable. I was scared, but thank God I was able to put a good swing and it went out. I was very happy — No. 1 because I made it through the at-bat, and No. 2 because I helped the team.”

Scherzer (7-2) won two Cy Young Awards with Washington, made six All-Star appearances in seven seasons and helped the Nationals win the 2019 World Series before getting dealt to the Dodgers at last year’s trade deadline. He allowed three runs (two earned) in 6 2/3 innings and struck out five while throwing a season-high 105 pitches.

“Command-wise, he wasn’t normally where he’s spoiled us at,” New York manager Buck Showalter said. “To be able to compete through that was something to watch. I kind of enjoy those in a way. They kind of remind me of why guys like him are different.”

Scherzer is 2-1 with a 1.62 ERA in six starts since returning from the injured list July 5.

Soto, a two-time All-Star and one of the few pivotal pieces remaining from Washington’s 2019 title team, was applauded loudly throughout the night. He walked in the first, moved to third on Josh Bell’s double and scored on Marte’s throwing error from right field. Soto also belted Scherzer’s pitch in the fourth to center field for his 21st homer of the season and 119th — and perhaps last — with the Nationals.

“It means a lot,” Soto said of the fan reaction. “It kind of feels weird, too, because nothing’s happened yet. We’re still waiting. It’s kind of cool at the same time, but it’s kind of weird, too.”

Corbin, who leads the majors in losses, allowed four runs and seven hits in 4 1/3 innings while striking out four. He has lost five consecutive starts, posting a 10.29 ERA in that span.

New York leadoff man Brandon Nimmo had four hits, his most since collecting a career-high five against Baltimore on Aug. 15, 2018.

Nationals: OF Victor Robles, who missed Sunday’s game with leg cramps, returned to the lineup. … Washington selected the contract of INF Ildemaro Vargas from Triple-A Rochester.

Washington sent utility man Ehire Adrianza to Atlanta for minor league outfielder Trey Harris. Adrianza hit .179 with no homers and seven RBIs in 31 games for the Nationals. The 26-year-old Harris hit .238 with two homers and 16 RBIs in 59 games for Double-A Mississippi.