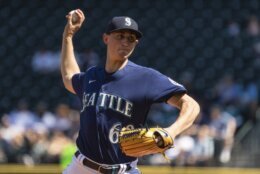 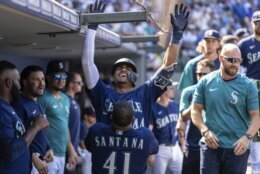 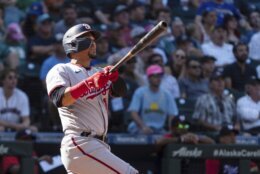 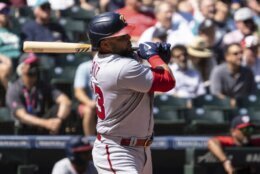 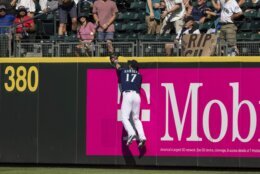 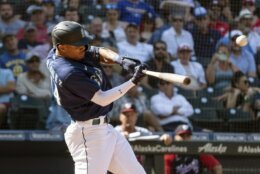 Kirby gave up five hits and one run before throwing his first ball to Joey Meneses in the third. Kirby topped the mark of 21 consecutive strikes to open by Joe Musgrove for Pittsburgh against St. Louis in 2018.

Rodriguez hit his 20th home run, tying it at 1 in the eighth. The 21-year-old sensation who put on quite a show at the All-Star Home Run Derby became the fourth rookie in big league history with 20 home runs and 20 stolen bases in the same season, joining Mitchell Page (1977 Athletics), Ellis Burks (1987 Red Sox) and Marty Cordova (1995 Twins).

“I’m happy about it,” Rodriguez said. “Not a lot of people do it all the time.”

Rodriguez leads all rookies in home runs and has stolen 23 bases.

The teams split its brief two-game series, with Seattle winning three of four this year after sweeping Washington in a doubleheader July 13. The Mariners hold the third and final spot in the AL wild-card race while the Nationals have the worst record in the majors.

Vargas homered with two outs off Paul Sewald (3-4), who had not given up an earned run since July 26. It was his third homer of the year, two of them for Washington after he began the year with the Chicago Cubs.

“Super excited in that moment,” Vargas said through a translator. “Anything I can do to help the team win. I’m here to do the little things and take advantage of the opportunities.”

Kyle Finnegan (5-2) allowed a couple of baserunners in the ninth before retiring Cal Raleigh on a flyout.

Nationals starter Anibal Sánchez allowed no runs and two hits in 4 1/3 innings. In his last two outings, the 38-year-old has given up one earned run and three hits in 9 1/3 innings.

“The one thing I could say about Aníbal right now is he keeps us in the ball game,” Nationals manager Dave Martinez said.

Kirby struck out nine in seven innings, giving up eight hits without a walk.

Nelson Cruz hit an RBI single in the first.

Washington has gone 41 straight games without its starter being the winning pitcher. It’s the longest drought in major league history. Despite the unfortunate streak, Sánchez’s last three outings resulted in wins for the Nationals.

Mariners: LF Sam Haggerty is dealing with an isolated deltoid strain but is progressing, manager Scott Servais said. Haggerty is expected to be ready Thursday against Cleveland. He’s available off the bench if needed.

Nationals: Top pitching prospect RHP Cade Cavalli will make his major league debut at home vs. Cincinnati on Friday. In his last outing with Triple-A Rochester on Aug. 20, he pitched five innings, allowing one run and striking out eight. He’s 6-4 with a 3.71 ERA in 20 games this season with Washington’s top affiliate. Cavalli was selected 22nd overall in the first round of the 2020 MLB draft by the Nationals.

Mariners: LHP Marco Gonzales (8-12, 4.08) looks to carry momentum into Thursday’s home game against Cleveland. He gave up one run in Seattle’s 10-2 win over Oakland last week.