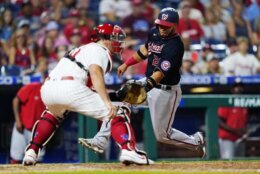 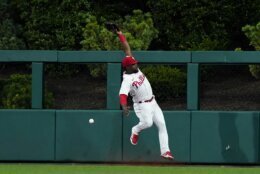 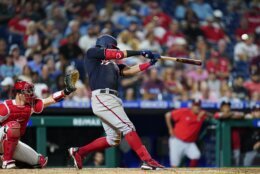 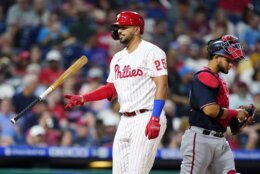 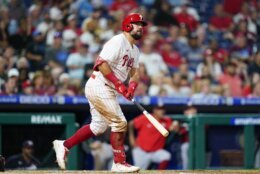 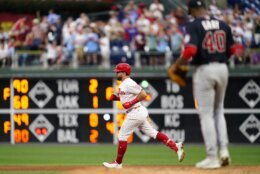 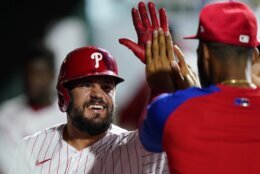 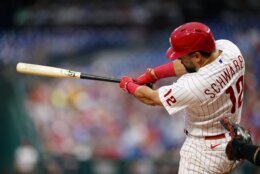 PHILADELPHIA (AP) — Kyle Schwarber insists — even as he launches balls deep into the seats at such a pace he could set several Phillies home run records — that nothing has changed about his stance, his routine, his mental approach.

“I just always go back to the process,” Schwarber said. “They’re just happening to go out of the park. It’s not like I’m going up there trying to hit a home run.”

He just could have used some help at the plate to keep the Phillies rolling.

Luis Garcia hit a two-run double in the seventh inning off Phillies starter Aaron Nola (5-6) for a 3-2 lead, spoiling another sensational power display from Schwarber.

They call his shots Schwar-bombs in Philly — well, same as they did at pretty much any of his previous three stops — and his prodigious power has made him an instant fan favorite in his first season with the Phillies.

Schwarber’s homer-happy production in the first half has stamped him among the greats in franchise history for best starts with the long ball.

__ He is the first Phillies player with back-to-back multi-homer games since Chase Utley in 2006.

— Schwarber had his 19th career multi-homer game and fifth this season. He has seven homers in his last nine games.

__ And he’s four away from matching Mike Schmidt for most home runs by a Phillies player before the All-Star break (Mike Schmidt, 31 in 1979).

His $80 million, four-year deal suddenly seems like a bargain.

Schwarber led off the game with a single. Fine, of course, but not what 22,369 fans paid to see.

He delivered in the fourth with a 375-foot shot that landed about five rows into the right-field seats and tied the score 1-all. Schwarber connected again in the sixth, a long drive that knocked off a Toyota ad that hangs off the second deck for a 2-1 lead. His teammates splashed water bottles his way from the dugout and fans deliriously danced in the stands celebrating what has become the Summer of Schwarbs.

“When he gets going, he can hit them a long way,” Nationals manager Dave Martinez said.

Schwarber had a chance to tie the game leading off the eighth but struck out on a check swing against Kyle Finnegan.

“Just got beat by a fastball there,” Schwarber said.

He had little help on offense, though, as Gray and three relievers held the Phillies to four hits while striking out 16 batters. Tanner Rainey worked the ninth for his 12th save to help the Nationals snap a six-game losing streak.

Yadiel Hernandez and Keibert Ruiz hit consecutive singles off Nola in the seventh and Garcia followed with a double to center that Odubel Herrera got a bad read on and misplayed to make it 3-2.

“I missed pretty bad on Garcia. I tried to go down and away and missed way up,” Nola said.

Washington star Juan Soto batted second as the designated hitter in his first start since he left a game Sunday with tightness in his left calf. He pinch-hit Monday and sat out Tuesday’s 11-0 loss. He lined a single to center in the fourth and scored on Hernandez’s double to right over the outstretched glove of Nick Castellanos.

Gray walked one and allowed four hits over six innings.

“His slider has late bite,” Martinez said. “When he can throw his fastball around the plate, and be consistent with throwing his fastball, that makes his slider that much better. He did that tonight. When he pounds that strike zone like he did and can make pitches when he needs to, he gives us good outings all the time.”

Nola gave up three runs, seven hits and struck out three in 7 2/3 innings — his sixth straight start of at least seven innings.

“There were some soft hits tonight,” Phillies manager Rob Thomson said. “I saw two balls that were hit hard, basically.”

Nationals: Nelson Cruz sat out a second straight game with a stomach illness.

The Phillies could hit a bump in the wild-card run if they don’t have a full roster of their regular players because of COVID-19 regulations for their games Tuesday and Wednesday in Toronto. Unvaccinated foreign nationals are currently prohibited from entering Canada, and limited exemptions to the rule no longer apply to professional athletes. Thomson said it was “a concern not having a full club” but that he would address the issue this weekend in St. Louis. Thomson said unvaccinated players had been encouraged to receive the necessary shots.