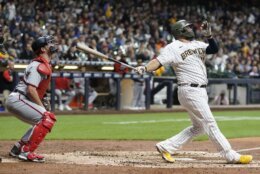 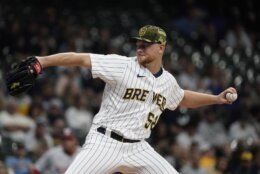 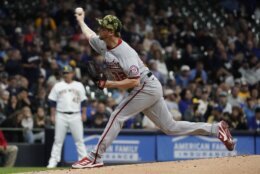 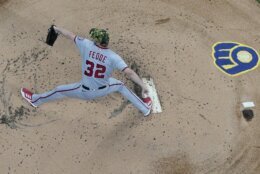 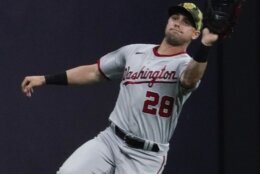 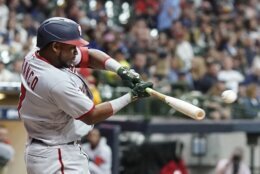 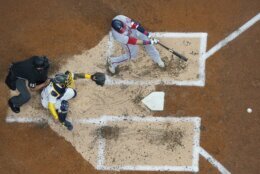 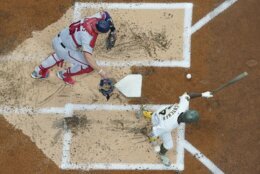 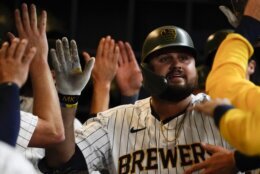 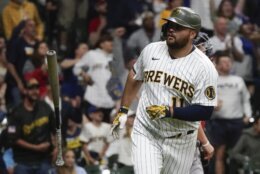 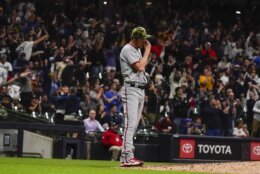 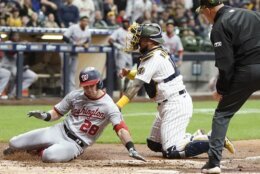 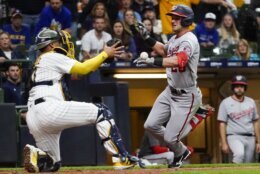 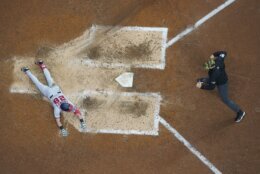 MILWAUKEE (AP) — Eric Lauer feared his bid to keep the Washington Nationals scoreless was in jeopardy as soon as Lane Thomas hit the ball.

The Brewers were clinging to a 2-0 lead in the seventh inning Friday night when Thomas ripped a shot to deep center field for a triple but was thrown out at home trying to score on the play. Milwaukee broke the game open an inning later and rolled to a 7-0 victory.

“It was a huge, huge momentum shift for us, just because being able to make two perfect relay throws and get a tag on a guy is hard to do,” Lauer said. “It was an awesome play.”

The Brewers won despite hitting into a triple play in the bottom of the seventh.

Milwaukee had runners on first and second with nobody out when Luis Urías hit a grounder directly to third baseman Maikel Franco, who stepped on the bag to start a 5-4-3 triple play.

“Close game, one pitch, three outs,” Franco said. “We got excited about it.”

But it was the foiled attempt at an inside-the-park homer that proved to be the biggest play of the night.

Thomas ripped a one-out drive in the seventh that bounced off the warning track, hit the center-field wall and then rolled to the left down the track and away from Taylor in center field. While Renfroe sprinted from right to center to retrieve the ball, Thomas rounded the bases.

Thomas easily made it to third and was waved home by third base coach Gary DiSarcina, but the relay throw from second baseman Kolten Wong beat him to the plate.

“I was just thinking be aggressive and try to get a run on the board,” Thomas said. ”It’s a cool play. It stinks it didn’t end up how we wanted to.”

Nationals manager Dave Martinez wanted a replay review to determine whether catcher Omar Narváez illegally blocked Thomas’ path to the plate, but no review was conducted. Martinez said after the game he was told that he didn’t call for the replay within the allotted 20 seconds.

Milwaukee had a 2-0 lead at the time thanks to Tellez’s two-run homer in the sixth off Nationals starter Erick Fedde (2-3).

Those were all the runs Lauer (4-1) would need. The left-hander struck out five and allowed five hits and no walks in his seven-inning stint. Devin Williams worked the eighth and Aaron Ashby completed the shutout.

When the score was still 2-0, the Nationals threatened to tie the game in the eighth.

The Brewers then put the game out of reach as Taylor hit a three-run homer and Renfroe had a two-run single in the eighth against reliever Austin Voth.

Nationals: INF Carter Kieboom will undergo season-ending Tommy John surgery. Kieboom went on the injured list before the season and has been dealing with an ulnar collateral ligament sprain and flexor mass strain in his throwing elbow. … Martinez said RHPs Stephen Strasburg and Joe Ross each felt fine after working three innings and throwing 43 pitches in a simulated game Thursday in Florida. Both are waiting to make their 2022 debuts. Strasburg is recovering from thoracic outlet syndrome surgery and has pitched a total of 26 2/3 innings since the start of the 2020 season. Ross hasn’t pitched in a major league game since Aug. 10 due to a partially torn elbow ligament.

Brewers: OF Andrew McCutchen, who rejoined the team Tuesday after a bout with COVID-19, returned to the lineup as the designated hitter. Counsell said before the game that McCutchen is available to play the outfield as well. The Brewers made room for him by optioning RHP Trevor Kelley to Triple-A Nashville.

LHP Patrick Corbin (0-6, 6.28 ERA) starts for the Nationals and RHP Brandon Woodruff (4-2, 5.35) pitches for the Brewers when the three-game series continues Saturday.