A crucial error by shortstop Alcides Escobar led to all the Colorado Rockies' scoring in a 5-2 win over the Washington Nationals on Wednesday night.
Listen now to WTOP News WTOP.com | Alexa | Google Home | WTOP App | 103.5 FM
(1/6) 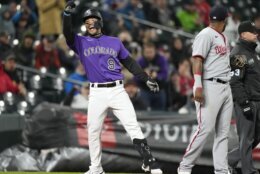 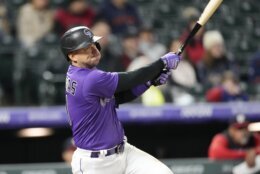 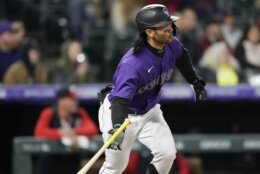 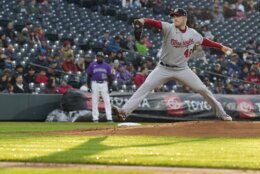 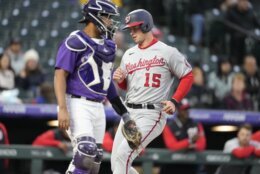 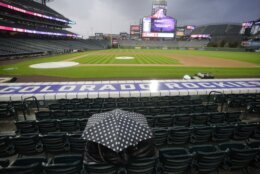 DENVER (AP) — Jose Iglesias had a two-run double and Connor Joe a two-run triple in consecutive at-bats in the fourth inning after a crucial error by shortstop Alcides Escobar, and the Colorado Rockies rallied to beat the Washington Nationals 5-2 on Wednesday night.

“They opened up the door for us and (Iglesias) delivered with a big blow,” manager Bud Black said of the shortstop who replaced departed free-agent Trevor Story. “We took advantage of a couple mistakes and that’s what you need to do.”

Lane Thomas hit his first homer and Cesar Hernandez went 2 for 4 with an RBI to extend his hitting streak to 10 games for the Nationals, who committed three errors. Escobar also struck out three times and Washington hit into four double plays as its two-game winning streak was stopped.

With the Nationals up 1-0, Escobar booted a grounder that could have been an inning-ending double play for his second error of the game to load the bases. Iglesias followed with a liner to right off Patrick Corbin (0-5), and center fielder Victor Robles then couldn’t make a diving catch of Joe’s hard-hit ball.

“I fielded the ground ball perfectly and then when I tried to transfer it, it just got tangled up in my hand,” Escobar said through an interpreter. “They’re errors that I call dumb. I don’t want to commit them and I feel extremely bad. And I feel even worse since Corbin did a tremendous job for us out there.”

Corbin went all eight innings, giving up five runs — three earned — and nine hits with no walks and three strikeouts.

Corbin became the first pitcher to throw a complete-game loss in the majors since Miami’s Sandy Alcantara on June 16 last year at St. Louis. His five losses are tied with Cincinnati’s Vladimir Gutierrez for the most in the majors.

“We’ve got to catch the ball,” manager Dave Martinez said. “The story today should be about Patrick. For me, he’s back.”

Gomber allowed two runs and seven hits with six strikeouts in his third straight strong outing. Daniel Bard pitched a perfect ninth for his seventh save in a game that took just 2 hours, 18 minutes after being delayed 25 minutes before the start by rain.

Yadiel Hernandez, the 34-year-old Cuban in his third season in the majors, had two more hits for Washington in his fourth straight multihit game while batting cleanup in place of the injured Nelson Cruz. Hernandez is batting .377.

The Nationals claimed RHP Cory Abbott off waivers from San Francisco and optioned him to Triple-A Rochester. LHP Sean Doolittle (elbow) was moved to the 60-day IL to open a spot on the 40-man roster.

“With spring training shortened, you can never have enough pitchers,” Martinez said. “He’s kind of a depth piece for us.”

Nationals: Martinez said Abbott had a plasma injection in his left elbow last week and won’t be able to throw for at least another five weeks. … Martinez said DH Cruz (back) was “still a little stiff” and kept out of the lineup, a day after he was lifted for a pinch hitter. Cruz was available to pinch hit and could return Thursday. … RHPs Stephen Strasburg (neck) and Joe Ross (elbow) threw live batting practice in Florida. … Gary DiSarcina continued to coach third base after taking a foul ball off the back of his head while standing in the dugout in the fourth.

Rockies: OF Kris Bryant (back) is still only throwing and not hitting, manager Bud Black said, making it unlikely he’ll be ready to play when he’s eligible to come off the injured list Friday.

A day after Houston’s Dusty Baker won his 2,000th game as a manager, Black recalled being a part of Baker’s first win. Black was on the San Francisco team, but didn’t pitch, when Baker won his managerial debut at St. Louis on April 6, 1993.

Black said Baker later encouraged him to stay in baseball.

“He’s been a great influence on my career, from the back end to my playing career to when I got into coaching and managing,” Black said. “He was always a great sounding board to me. He’s a Hall of Fame manager, for me.”