Music blaring, smiles all around, the Miami Marlins are enjoying postgame time these days — five victories in a row, a winning record and second place in the standings will do that.
Listen now to WTOP News WTOP.com | Alexa | Google Home | WTOP App | 103.5 FM
(1/8) 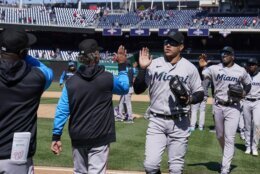 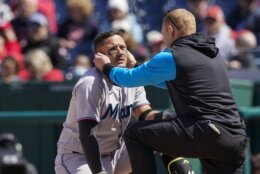 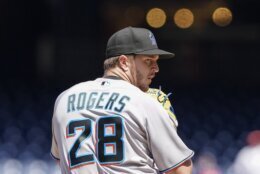 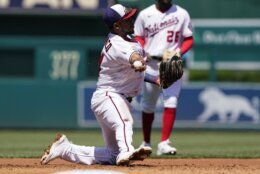 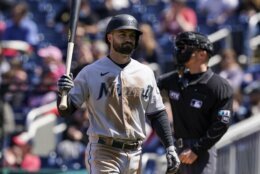 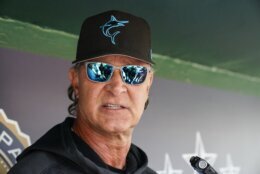 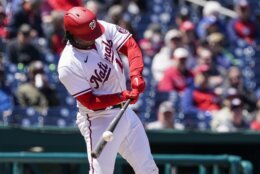 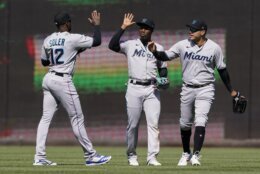 Music blaring, smiles all around, the Miami Marlins are enjoying postgame time these days — five victories in a row, a winning record and second place in the standings will do that.

Especially for a team, as left-hander Trevor Rogers pointed out after his longest start and first win of this season, coming off a 67-95 finish in 2021.

“It’s just a different vibe in this locker room. We know that we can do it this year,” Rogers said. “Last year was last year and it was very unfortunate — but that was last year.”

Rogers allowed one run in six innings, the bullpen made a lead stand up again, and the Marlins already have exceeded their best stretch of last season after a sweep-completing 3-2 victory over the the reeling Washington Nationals before an announced crowd of 12,454 Thursday.

The 2021 Marlins never put together more than four consecutive wins.

“You have to be able to string together wins if you’re going to go anywhere,” manager Don Mattingly said. “And that shows you, hopefully, that our club’s getting ready to play every day.”

Rogers (1-3) came in with a 6.94 ERA but lowered that to 5.09 after giving up just two hits against a Nationals lineup that has produced merely 16 runs during an eight-game losing skid.

Cole Sulser worked around a leadoff walk in the ninth to get his first save of 2022 in his first chance.

Patrick Corbin (0-4) lost again for Washington, despite his best outing of the season, with three runs — two earned — in six-plus innings.

“It’s been a tough week or so for us,” Corbin said.

The Nationals went ahead 1-0 in the first on Josh Bell’s RBI double after a wild pitch and a passed ball helped get a runner to third. Miami tied it with an unearned run in the third, when the Nationals made two miscues: a throwing error on shortstop Lucius Fox — a rookie who is also 0 for 20 and drew attention by vomiting on the field during Sunday’s game — and a fielding error on center fielder Victor Robles.

Corbin pitched into the seventh for the first time this season but that did not go well once he got there. Brian Anderson led off with a double after Robles twisted and turned and couldn’t find the ball, losing his hat and sunglasses in the process.

A scary moment came next: Corbin hit Miguel Rojas on the flap of his helmet, leaving him with a bruised jaw. Rojas tried to spin out of the way and ended up face-down in the dirt.

“Kind of shocked me to see that,” said Corbin, who immediately dropped to his knees and bowed his head on the infield grass.

Mattingly and a trainer came out to check on Rojas, who remained in the game and eventually went to first base; as soon as he did, Martinez removed Corbin.

“He was rattled,” Martinez said about his left-hander.

Righty reliever Victor Arano entered, and Mattingly went to a left-handed pinch hitter, Jesús Sánchez, who promptly singled in the go-ahead run. After a groundout produced the first out, Arano’s wild pitch led to another run and a 3-1 lead for Miami.

Washington pulled within one on consecutive doubles in the eighth, but Sulser struck out Bell to end the threat.

“Big out,” Mattingly called it.

The Marlins optioned LHP Daniel Castano to Triple-A Jacksonville and recalled RHP Zach Pop from there.

Marlins: Return to Miami for a six-game homestand that begins Friday against Seattle. RHP Elieser Hernandez (1-1, 5.87 ERA) starts the opener.

Nationals: Head out on a three-city, nine-game road trip, starting at San Francisco. RHP Aaron Sanchez (0-1 8.31), who played for the Giants last season, will be on the mound night for Washington. The Giants swept a four-game series at Nationals Park last week.