A Nationals baserunner was thrown out at the plate two times in the fourth inning, as reeling Washington fell 5-2 to the Miami Marlins on Wednesday night.
Listen now to WTOP News WTOP.com | Alexa | Google Home | WTOP App | 103.5 FM
(1/3) 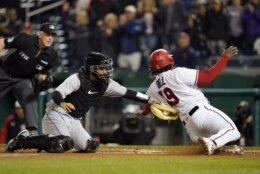 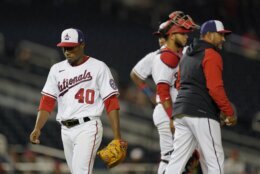 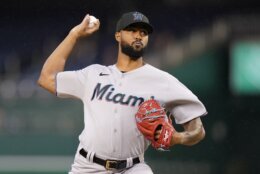 WASHINGTON (AP) — First came Washington’s Josh Bell, heading for home from second base on a teammate’s single — not at his fastest on account of a right hamstring issue that kept him out of the previous game.

Result: Out at the plate.

Next, mere moments later, came Yadiel Hernandez, heading for home from second on a teammate’s single — despite being given a stop sign by Nationals third-base coach Gary DiSarcina.

Result: Out at the plate.

Those back-to-back baserunning blunders in the fourth inning, with Miami outfielders Jesús Sánchez and Avisaíl García each making a throw to the plate to prevent a run, backed up Joey Wendle’s first homer for the Marlins and helped produce a 5-2 victory over the reeling Nationals on Wednesday night.

“Two plays at the plate that were pretty much bang-bang,” Bell said. “Six inches away from a different ballgame there. That’s just the way the game goes sometimes.”

Especially lately, it seems, for Washington, which has lost six consecutive games and managed to push across a grand total of 13 runs in that stretch.

Which, manager Dave Martinez acknowledged, contributes to maybe pushing to get some more scoring for a club that is now 6-13 and last in the NL East.

His lineup managed to take three singles and two walks in the fourth against Sandy Alacantara (2-0) and turn them into one solitary run in the fourth.

After walks to Juan Soto and Bell around a strikeout of Nelson Cruz, Hernandez delivered a run-scoring single. Keibert Ruiz then singled to center, but Sánchez threw out Bell at the plate after he was waved around third by DiSarcina.

“He’s struggling a little bit right now. We’ve got to be conscious of that,” Martinez said about his first baseman. “We’ve got to know now that we just can’t push him that much until he really feels better.”

Then Maikel Franco singled, too, and Hernandez tried to come home from second, too — and he got thrown out, too, this time by García from right. One difference: DiSarcina had his left hand extended toward the runner and his right hand aloft in an attempt to stop Hernandez.

“I was going all the way. I just had that in my head, to try to score there with two outs,” Hernandez said through an interpreter. “By the time I did catch a glimpse of him on the side, it was too late for me to stop. I had to keep going.”

Here’s how Miami manager Don Mattingly preferred to view the sequence of events: “That defense in that inning changed the game a little bit.”

Alcantara extended his shutout streak to 17 innings over his past three starts for the Marlins, who have won three of their past four games.

He ended up giving up one run and six hits over six innings before an announced crowd of 12,613 on a rainy evening.

“I did a pretty good job tonight,” the right-hander said.

Wendle, who turned 32 on Wednesday, drove an 83 mph first-pitch slider from Josiah Gray (2-2) to center field after Sánchez walked and Garrett Cooper singled. Wendle was an AL All-Star for the Tampa Bay Rays in 2021, then was traded to Miami in the offseason.

Anthony Bender pitched a 1-2-3 ninth for his third save in four chances. It was his first appearance since giving up a two-run homer to Nolan Arenado in the ninth inning of a 2-0 loss for Miami on April 20.

Marlins: SS Miguel Rojas was out of the lineup for a third consecutive game with what Mattingly described as an “upper-respiratory thing.”

Nationals: INF-OF Dee Strange-Gordon began a rehabilitation assignment at Triple-A Rochester. He went on the 10-day IL on April 15; the team did not say why, which has been its policy for roster moves involving COVID-19.

Marlins RHP Pablo López carries a majors-best 0.52 ERA into Wednesday night against Nationals RHP Erick Fedde, who has a 6.75 ERA.