Then, after a chest bump and forearm bash that were part of the choreography with teammates at home plate to celebrate the big blow in the New York Mets' 5-0 victory over the Washington Nationals on Saturday night, Alonso put one index finger, then the other, to his lips.
Listen now to WTOP News WTOP.com | Alexa | Google Home | WTOP App | 103.5 FM
(1/8) 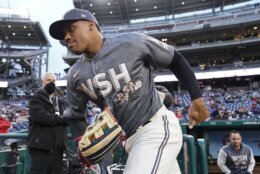 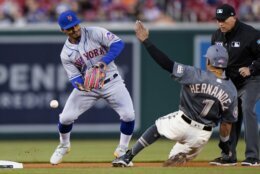 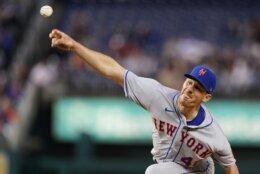 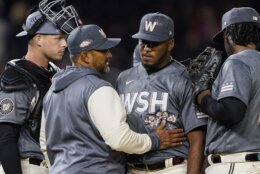 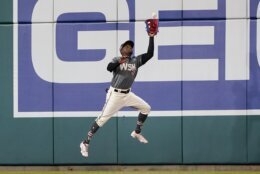 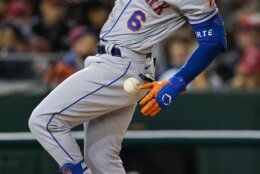 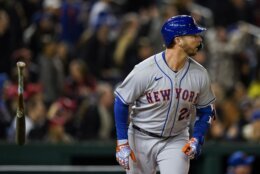 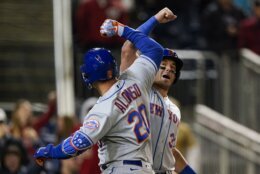 Then, after a chest bump and forearm bash that were part of the choreography with teammates at home plate to celebrate the big blow in the New York Mets’ 5-0 victory over the Washington Nationals on Saturday night, Alonso put one index finger, then the other, to his lips.

Who was he telling to hush?

“That was directed at the Nats fans,” Alonso said, “and the opposing team.”

Chris Bassitt (1-0) cruised through six innings in his Mets debut, and New York won its third straight to open Buck Showalter’s tenure as manager. The Mets, 3-0 for the first time since 2012, have outscored Washington 17-4 and go for a series sweep Sunday.

“The payroll is one thing; you obviously expect a lot of talent,” said Bassitt, who was acquired from Oakland in a trade last month and greeted in the hallway outside the visitors’ clubhouse Saturday night by a group of about 10 friends and relatives. “But, I mean, we’ve got two guys with completely busted mouths already, two games in, and they’re in the lineup the next day. To be on a team that wants go grind as hard as this team — good luck.”

He was referring to Alonso — his lower lip was bloodied by a pitch on opening day — and star shortstop Francisco Lindor, who took a ball off his jaw Friday night, leading to a benches-clearing interruption. In all, Nationals pitchers have plunked five batters through three games, including Starling Marte, who was struck by a breaking ball in the second inning Saturday.

Saturday’s game was scoreless in the fifth when New York loaded the bases with a single and a pair of walks against Joan Adon (0-1), whose first big league appearance came on the last day of the 2021 regular season. That brought up Alonso, who hit 53 homers in 2019, and a group of Mets fans near the visiting dugout sang a chorus of his full name, clearly audible on a night when the total attendance was announced at merely 21,369.

Adon threw a 91 mph fastball — “Just missed a little bit and it ran over the plate,” the right-hander said — and Alonso sent a towering shot beyond left field.

“One those (that) everybody hops out of the dugout to watch it,” Showalter said.

“Sometimes we lose sight of the guts it takes — whether you’ve been hit or not hit — to get into a major league batter’s box, with these guys throwing like this, and stay in there,” the skipper said. “That’s why people have so much emotional stir when things happen that puts them in harm’s way.”

LINDOR IN THE LINEUP

Lindor was back in the lineup after going through fielding drills several hours before game time. He hadn’t been checked by a dentist yet but thinks he might have a cracked tooth.

“I tried to eat and it hurt a lot. Hopefully, when I get to New York, I’ll get it taken care of. It hurts like if I had a cavity,” Lindor said, then added with a smile: “Hopefully the Mets have good insurance.”

He went 1 for 3 with a double and two walks; in the field, he was charged with an error when he dropped a toss while covering second base.

Mets closer Edwin Díaz left the team to go to Puerto Rico after the death of his grandfather. Díaz was put on the bereavement list. Lefty David Peterson was recalled from Triple-A Syracuse. Showalter said Díaz could return to the Mets on Monday in Philadelphia. He would be eligible to play as of Tuesday.

Nationals: RHP Mason Thompson left after throwing three pitches because of a right biceps issue. He will have an MRI exam Sunday. … RHP Aníbal Sánchez might not be able to make his first start of the season Monday at Atlanta because he came down with a stiff neck on the flight from Florida to Washington at the end of spring training. 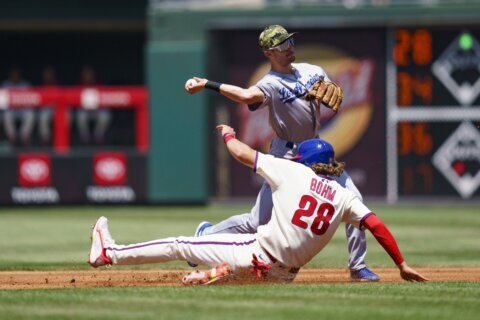