Nationals Notebook: Swept out of the season

The 2021 season is finally in the books for the Washington Nationals who, after a year of absence, had hoped to return to the postseason.
Listen now to WTOP News WTOP.com | Alexa | Google Home | WTOP App | 103.5 FM
(1/3) 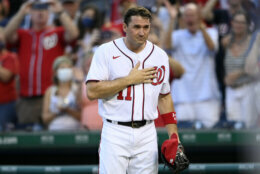 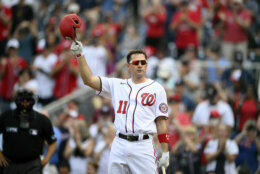 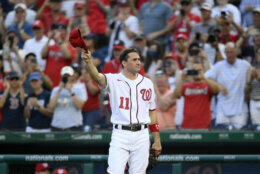 The 2021 season is finally in the books for the Washington Nationals who, after a year of absence, had hoped to return to the postseason, only to find themselves on a different track.

Next February, when they get together for Spring Training, even fewer strands linking the current club to the 2019 World Series will be in place. And, they’ll be a club trying to dig itself out of consecutive last place finishes.

Digesting the Division: Atlanta (88-73 ) wrapped up their fourth straight NL East title Thursday when they beat slumping Philadelphia (82-80 after losing six of seven to end the year). The New York Mets (77-85) take third and continue to waste the prime of Jacob deGrom with a fifth straight season of not reaching the playoffs. Miami (67-95) finishes near last place for the second straight season, while the Nationals (65-97) have finished last for the second straight year.

O’s Woes: The Birds finish 52-110, although they were pleased as punch Thursday night to have taken two of three from Wild Card hopeful Boston. Because beating the Sox (four World Series titles this century) is a big deal, even when one loses three straight in the following series in Toronto (two World Series titles since the O’s last), or 11 of 19 games to the New York Yankees (two titles this century and five since 1990) this year. O’s fans also pat themselves on the back for sweeping the Nats this summer, accelerating the demise of the 2019 World Series-winning nucleus. Hang your banners, my Baltimore friends.

Missing You: Trea Turner takes the batting crown, hitting .328 for the season (.338 since being dealt to the Dodgers) while posting career highs in runs, hits, homers and RBI. It’ll be a hoot watching him in the playoffs. Max Scherzer (15-4, 2.46 ERA) had a second straight rough outing as he allowed five runs over 5.1 innings against San Diego. Will he start the Wild Card Game?

Last Week’s Heroes: Alcides Escobar hit .375 with a homer and two RBI. Josh Bell batted .389 and finishes the year with 27 homers and 88 RBI. Josiah Gray went 1-0 with a 3.18 ERA over two starts, giving one hope for the future. And Ryan Zimmerman received a standing ovation Sunday after what may have been his final game as a Washington National. The team’s first-ever first round pick has played in 1,799 career games for this team. And while it’s a shame, if this is the end, that Zim couldn’t have gone out under better circumstances, it’s awesome D.C. had him as long as they did.

Last Week’s Humbled: Juan Soto hit 2-for-20, dropping his batting average to .313 as he finishes with 29 homers and 95 RBI. The less than ideal ending, plus the fact that the Nats wound up in fifth place, hurts what was a compelling case for MVP. Carter Kieboom hit .143 and wraps up the season at .207 with 20 RBI over 62 games. Can he turn the corner in 2022 and become an everyday third baseman in the majors? Mason Thompson walked a reliever Saturday night and posted an ERA of 27.00 for the week, while Paolo Espino, Alberto Baldonado, Tanner Rainey and Erick Fedde also had double-digit ERA’s during the final week of the season.

Offseason Questions: It all begins with pitching, and one wonders if Stephen Strasburg will be healthy next year and if Patrick Corbin will be more like the pitcher we saw in 2019 than the one we’ve seen over the last two years. Does Victor Robles return to form, or will we see others in centerfield? The moves that were made at the trading deadline in July signified the end of one era, but also the start of another.

See you in February.