Coronavirus News: The nuance of dealing with COVID-19 | New cases in Montgomery Co. | 'Is It Normal Yet' Podcast: A perfect storm | Latest cases in DC region
Home » Washington Nationals » Alcantara takes no-hitter into… 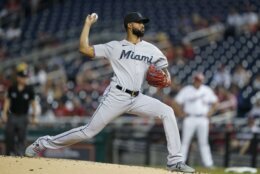 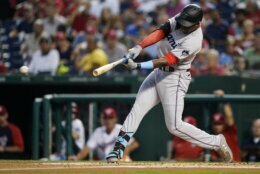 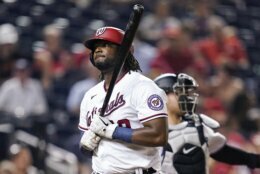 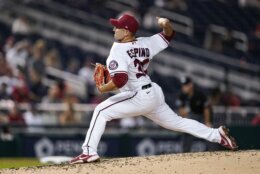 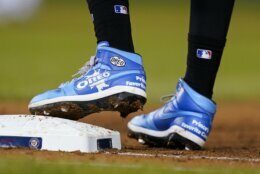 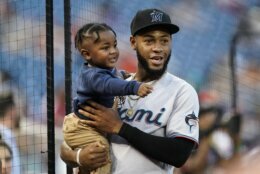 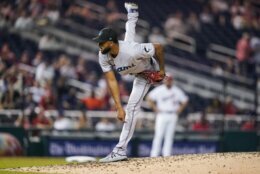 With two outs in the seventh, Josh Bell lined a single off the base of the right-field fence to end Alcantara’s no-hit bid. The right-hander then retired his next four batters before getting lifted for a pinch hitter, leaving with seven strikeouts and no walks after throwing 96 pitches.

Jesus Sanchez had a first-inning RBI single and Alex Jackson doubled home two runs in the ninth. Dylan Floro worked a one-hit ninth for his 11th save.

In his previous start, Alcantara permitted one run on four hits in nine innings of a no-decision against the Mets, striking out a career-high 14.

The closest thing to a hit for Washington before Bell’s single was when Juan Soto smashed a shot off Alcantara’s left leg near the knee with two outs in the fourth. The ball ricocheted to first baseman Lewin Diaz, who stepped on the bag for the out.

“Once that ball hits him, you know it hit him good,” Mattingly said. “I thought really that was going to be the end of it right there, but Sandy fought for that and that wasn’t really going to be enough.”

Mattingly, who said he wasn’t going to feel good until Alcantara was out of the game, first had him checked by trainer Gene Basham. Then pitching coach Mel Stottlemyre monitored Alcantara inning by inning to make sure he wasn’t altering his delivery to compensate.

“After I got the line drive in my leg I just said, ‘Stay in the game, it doesn’t matter what happened,'” Alcantara said. “I’m the guy who’s going to die on the mound. … I stayed in the game and I was competing.”

“This is the hardest I’ve seen him throw: 99-100 (mph), slider 93-94. And he was hitting his spots,” Nationals manager Dave Martinez said. “He was really good. Our guys were battling. We were putting balls in play. But he was just that good.”

Most of those no-hitters this year came before Major League Baseball cracked down on the use of illegal sticky substances by pitchers.

Six Marlins have thrown no-hitters, the last by Edinson Volquez in a 3-0 win against the Diamondbacks on June 3, 2017. The Nationals (2005-present) have never been no-hit.

Paolo Espino (4-5) allowed one run on six hits and three walks in six innings for Washington.

Nationals infielder Adrian Sanchez was designated for assignment. Sanchez was hitting .257 in 16 games and is out of minor league options. He signed with the Nationals in 2007 when he was 16 and made it to the majors in 2017. Only Ryan Zimmerman (drafted in 2005) has been with the organization longer.

Nationals: Ruiz was back in the lineup after leaving Saturday’s game when he was hit in the head by a fastball from Pittsburgh’s Kyle Keller. Ruiz took a foul ball off the mask in the first inning but remained in the game. … INF Jordy Mercer (left calf strain) was reinstated from the 10-day injured list.

Marlins: LHP Jesus Luzardo (5-7, 6.72 ERA) has allowed three earned runs or fewer in each of his past three starts, each a Marlins win. He faced Washington on Aug. 24 in Miami and gave up five runs on 10 hits in 4 2/3 innings.