Riley Adams homered and drove in three in his first game against his former team, Erick Fedde won for the first time in more than two months and the Washington Nationals snapped a season-high, seven-game losing streak Tuesday night with a 12-6 victory over the Toronto Blue Jays.
Listen now to WTOP News WTOP.com | Alexa | Google Home | WTOP App | 103.5 FM
(1/4) 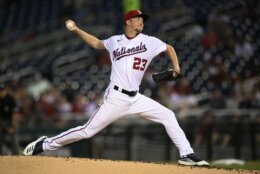 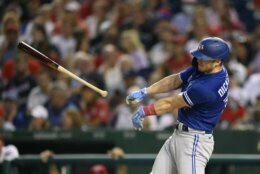 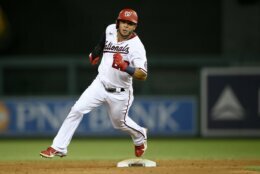 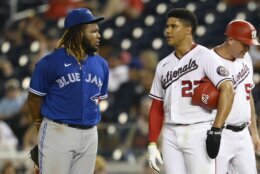 WASHINGTON (AP) — Riley Adams homered and drove in three in his first game against his former team, Erick Fedde won for the first time in more than two months and the Washington Nationals snapped a season-high, seven-game losing streak Tuesday night with a 12-6 victory over the Toronto Blue Jays.

Adams, acquired last month from Toronto for reliever Brad Hand, had a career-high three hits. He delivered a two-run double in the eighth to provide some insurance after the Blue Jays trimmed a seven-run deficit to 8-6. The catcher also homered in the fourth.

“It was fun to see those guys and it’s definitely fun competing against them and trying to do my best out there,” said Adams, who played in 12 games this year with Toronto. “When I saw I was catching Game 1 (of the series) tonight, there was definitely a little bit more excitement given the circumstances.”

Yadiel Hernandez went deep and drove in three for the Nationals, who had dropped 12 of their last 13. Washington is 4-13 since a trade deadline selloff scattered Max Scherzer, Kyle Schwarber, Trea Turner and others to playoff contenders.

Teoscar Hernández homered for the third consecutive game for Toronto, which has lost four of five since reaching a season-high 11 games over .500 on Wednesday.

Fedde (5-8) was 0-4 with a 6.32 ERA in his previous 10 starts, and he needed 94 pitches to get through five innings against the Blue Jays. He allowed three runs on five hits — including Hernández’s two-run shot in the fifth — while striking out four.

Fedde also received plenty of support. Yadiel Hernandez homered off Toronto starter Alek Manoah (5-2) in the second, then was in the middle of a six-run outburst in the third.

It was Washington’s first six-run inning since doing so twice in an 18-1 rout of Miami on July 19. The Nationals’ 12 runs were also their most since then.

Manoah allowed seven runs in three innings, the shortest of his 12 starts with the Blue Jays.

Blue Jays: Toronto placed OF George Springer (left knee sprain) on the 10-day injured list, retroactive to Sunday. Springer was injured while trying to make a catch Saturday at Seattle. Springer has played in only 49 games in the first season of his six-year, $150 million contract with the Blue Jays. … Montoyo said “there’s a good chance” LHP Tim Mayza (elbow inflammation) will be activated Wednesday. … Toronto recalled INF Otto Lopez from Triple-A Buffalo.

Nationals: Martinez said RHP Joe Ross was diagnosed with a sprained UCL and will not require Tommy John surgery for now. “I don’t expect him to pitch any more this year because we want to make sure he’s completely healthy and that he’s ready to go in spring training,” Martinez said. Ross is 5-9 with a 4.17 ERA.

Toronto SS Bo Bichette improved to 18 of 18 on steal attempts when he swiped second in the third inning. He joins Kansas City’s Nicky Lopez (13) and Cleveland’s Amed Rosario (12) as the only players with double-digit steals without being caught this season.

Nationals: Rookie RHP Josiah Gray (0-1, 4.13) has a 2.81 ERA with 18 strikeouts over 16 innings in three starts since his July 30 acquisition from the Los Angeles Dodgers.