Ryan McKenna scored on a sharp grounder by Ramon Urías for the winning run as the Baltimore Orioles completed a three-game sweep of the Washington Nationals with a 5-4 victory on Sunday.
Listen now to WTOP News WTOP.com | Alexa | Google Home | WTOP App | 103.5 FM
(1/5) 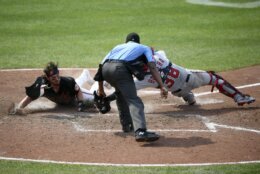 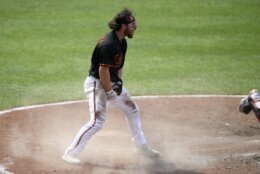 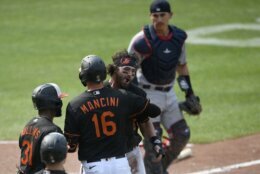 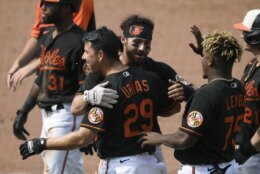 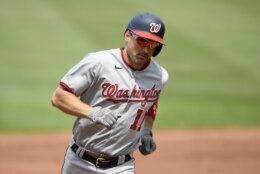 BALTIMORE (AP) — Ryan McKenna scored on a sharp grounder by Ramon Urías for the winning run as the Baltimore Orioles completed a three-game sweep of the Washington Nationals with a 5-4 victory on Sunday.

Trey Mancini, Maikel Franco and McKenna hit solo homers for the Orioles, who improved to 1-51 when trailing after eight innings.

“Overall, today was just a good day,” said McKenna, who hit his first major league home run. “I was glad that we were able to win that ballgame. Good vibes all around for the team.”

Orioles starter John Means allowed just two hits before the sixth, when he hit Alcides Escobar for the second time with a pitch and allowed a single to Trea Turner. After getting Juan Soto to fly out to center field and striking out Josh Bell, Means allowed a three-run home run to Ryan Zimmerman that gave Washington a 4-3 lead.

Brad Hand (5-4) hit Franco, gave up a single to McKenna and walked Austin Hays to start the ninth. Pat Valaika tied the game with a sacrifice fly before Urías hit a hard ground ball that was snagged by third baseman Carter Kieboom, who threw to the plate. McKenna slid home with the winning run, and the play was upheld after a replay review.

Hand blew his fourth save opportunity in 24 chances.

“In the ninth inning, you don’t expect that to happen,” Nationals manager Dave Martinez said. “It was a tough one. … We have to put it behind us. You can’t do nothing about these three losses.”

Cole Sulser (3-1) earned the win by throwing one-third of an inning.

Means, who made his second start for the Orioles since coming off the injured list on July 20 after a left shoulder strain, allowed four runs and five hits with two strikeouts and one walk over six innings. He also hit three batters.

“I felt a lot more in control today,” Means said. “I was hitting my spots a little better.”

The Orioles managed their first sweep of Washington at Camden Yards since June 2010.

Nationals: RHP Stephen Strasburg (neck strain) will see a specialist Monday. He still feels discomfort when he throws off the mound. Strasburg has not pitched since June 1. … RHP Max Scherzer played catch Sunday after he was scratched from a scheduled start the previous day because of right triceps discomfort. Martinez said the team is still evaluating Scherzer.

Orioles: INF Freddy Galvis (right quadriceps) is expected to play rehab games this week and could be back in the lineup by early August.

Nationals: RHP Joe Ross (5-8, 4.02 ERA) had no setbacks during his bullpen session Friday and will start the opener of a four-game series Monday in Philadelphia. Ross has been on the injured list since July 8 with right elbow inflammation.

Orioles: Spenser Watkins (2-0, 1.65) gets the start Tuesday against Miami. Watkins is only the second Orioles pitcher to allow one earned run or fewer in his first three major league starts, joining Dean Kremer.