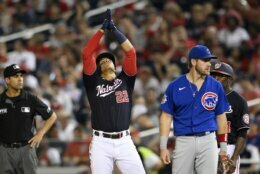 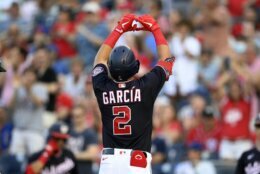 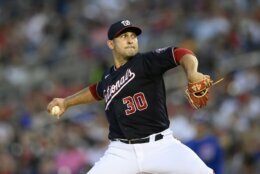 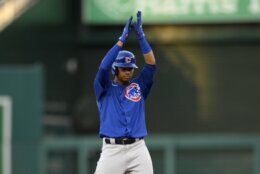 The cores of two recent World Series champions — Chicago in 2016, Washington in 2019 — were scattered to various contenders as both teams acknowledged the need to rebuild. Both did a thorough job, with Washington dealing eight veterans in six trades in a two-day span. Chicago also made a half-dozen trades in the 24 hours before the deadline.

By the time the weekend series began just hours after the deadline, Cubs mainstays Javier Báez, Kris Bryant and Anthony Rizzo had been dealt. So had Nationals stars Max Scherzer, Kyle Schwarber and Trea Turner.

In their stead were revamped lineups, as well as opportunities, both Friday and for the rest of the season.

So did Paolo Espino (3-2), who Washington did not name as the night’s starting pitcher until after it dealt Jon Lester to St. Louis in the afternoon. Espino pitched a career-high 5 1/3 innings, yielding his only run on Rafael Ortega’s double in the third. He allowed four hits while striking out six for his first victory since June 28.

“Whatever the role that’s given to me, I’m going to go out there and do my best and give my 100%, give the team a chance to win,” Espino said. “That’s my goal. Either starting, relieving, closing, anything.”

The Cubs closed within 4-3 on Patrick Wisdom’s two-run single in the eighth before Washington rookie Gabe Klobosits escaped the jam. Finnegan allowed a leadoff single in the ninth before inducing a double play grounder and a lineout to end it.

“It’s a little bit different out there not seeing the guys and names and big horses that we’re so accustomed to seeing, but I’m happy with the way the guys fought tonight,” Cubs manager David Ross said.

Arrieta, who was activated from the injured list Friday, allowed two runs in four innings in his first start since July 6.

Bell belted his 17th homer in the fifth, a solo shot off Adam Morgan to make it 3-1. Yadiel Hernandez added an RBI double in the sixth.

Cubs: Selected the contracts of OF Johneshwy Fargas, RHPs Manuel Rodríguez and Michael Rucker, OF/INF Andrew Romine and 1B Frank Schwindel from Triple-A Iowa. Both Rucker and Rodríguez made their major league debuts, with Rucker allowing a run in two innings and Rodríguez striking out two in a perfect eighth.

Nationals: Recalled C Tres Barrera from Triple-A Rochester and selected the contracts of Klobosits and INF Adrián Sanchez from Rochester.

Washington signed first-round pick Brady House. The shortstop out of Georgia’s Winder-Barrow High School was the No. 11 selection in this year’s MLB Draft.

Washington INF Starlin Castro was suspended for 30 games without pay and fined an undisclosed amount for violating MLB’s policy on domestic violence, sexual assault and child abuse. Castro will be ineligible for the postseason under the terms of the suspension and will be required to undergo evaluation and treatment, MLB said.

The Nationals said they would release Castro after his suspension is complete. “We take all allegations of abuse and harassment very seriously,” the team said in a statement. “We fully support the Commissioner’s decision.” 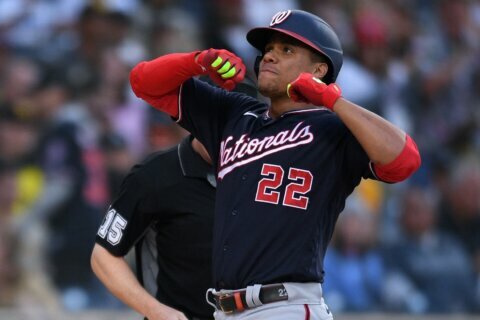 Corbin expected to start for the Nationals against Reds