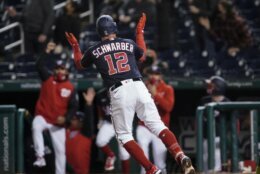 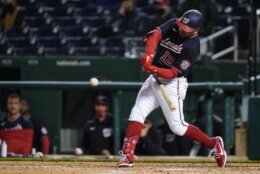 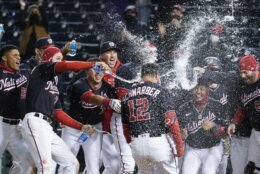 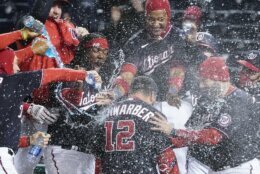 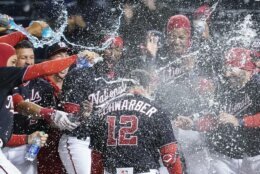 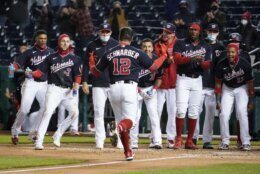 The lefty-batting Schwarber connected on a 2-1 pitch from left-hander Alex Young (0-3), sending a drive to right that traveled an estimated 463 feet for his first homer for Washington.

Scherzer, a three-time Cy Young Award winner, struck out the side in the seventh while passing Cy Young to move into 22nd place on baseball’s strikeout list. He finished with 10 on the day, giving him 2,808 for his career — two more than Young.

Martinez said he told Scherzer when he reached the dugout that he passed Young and Scherzer’s response was that he had “three of those on his wall.”

Scherzer allowed two singles and walked two in seven innings. After allowing a single to Kole Calhoun in the first, Scherzer retired 13 straight batters before allowing consecutive walks in the fifth.

It was the first double-digit strikeout game this season for the 36-year-old Scherzer. It was No. 99 for his career, and it came against his first major league team.

“We got ourselves a good old-fashioned pitcher’s duel,” Diamondbacks manager Torey Lovullo said. “Neither team really had a ton of baserunners. We made a mistake to that last batter and that’s what happens.”

“I don’t even know where it landed,” Scherzer said about his view of Schwarber’s winning homer that he watched from the Nationals training room.

“By the time it got into the air, I had already cracked the beer open and was ready to start partying.”

Diamondbacks: Lovullo said relief pitcher Joakim Soria (strained left calf) “felt well enough” to move up his bullpen session a day and threw off the mound Friday. … Outfielder Ketel Marte (right hamstring strain) was able to play catch and hit off a tee to go along with his light forward-running workouts.

Nationals: LHP Luis Avilán (left elbow inflammation) was placed on the 10-day injured list. RHP Kyle McGowin was recalled from the team’s alternate training site. … LHP Jon Lester threw three innings and 49 pitches in a simulated game at the alternate training site on Thursday. Martinez said it went well but gave no timetable for Lester’s Washington debut other than he would like to see him be able to go five innings.

The four-game series continues Saturday with RHP Erick Fedde (0-1, 3.75 ERA) pitching for Washington. RHP Luke Weaver (1-0, 2.13 ERA) will take the mound for Arizona in his third start of the season having already matched his win total from last season when he finished 1-9.