Max Scherzer’s 2020 season did not live up to the absurdly high standards of his past campaigns.

So, how much of his struggles should be attributed to the pandemic-altered season that was 2020, and what should be expected of the 36-year-old in 2021? If betting odds are any indication, last year was an aberration that he’ll bounce back from.

At +850 on PointsBet Sportsbook, Scherzer currently holds the third-best odds to win the National League Cy Young Award entering the 2021 season. Only Jacob deGrom (+400) and Trevor Bauer (+600) have better odds.

Scherzer, deGrom and Bauer represent the last three players to have won the award, with Bauer claiming it for the first time in 2020 following back-to-back awards for deGrom in 2018 and 2019 and Scherzer in 2016 and 2017. Scherzer, of course, also has a third Cy Young that he won in the American League back in 2013.

But while he’s likely on the back end of his prime, as the other two are in the middle of theirs, numbers exist that suggest he still has plenty left in the tank. His 12.3 strikeouts per nine innings last year was the second-highest of his career, trailing on his 2019 season.

Additionally, in that 2019 World Series-winning season, Scherzer’s numbers through 12 games were only marginally better than his 12-game sample in 2020 and similarly worse than his career averages. And the team was far worst, going 2-10 in those starts, with Scherzer posting a 2-5 record. But he went 9-2 in his final 15 starts of 2019, a turnaround that was only allowed by the length of a normal season, which he’ll presumably have in 2021.

Odds provided by our partner, PointsBet 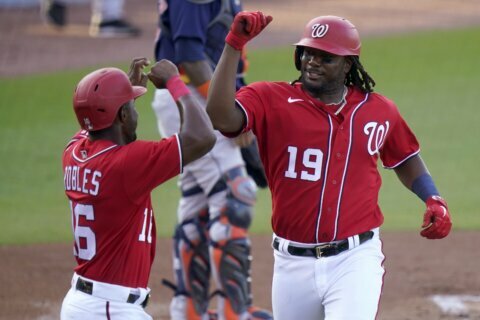