About a year ago, the Nationals were 19-31 and working to overcome injuries. Their ability to then win the World Series became the subject of reporter Jesse Dougherty's book.
Listen now to WTOP News WTOP.com | Alexa | Google Home | WTOP App | 103.5 FM

In a normal world, the Nationals would be playing the 50th game of their season this weekend, close to one-third of their schedule completed.

They were at their lowest point at exactly the same time last year.

On May 23, 2019, it looked like the Nationals were going nowhere with a 19-31 record — 10 games out of first place in the NL East and only a game and a half from falling into last place in the standings.

Manager Dave Martinez, though, was determined to remain positive, saying the team needed to focus on, and win, each day and not look ahead.

The players bought in and from that point on, the team posted the best record in baseball en route to their first World Series title.

“When you pull four players out of any lineup across baseball, I don’t care if you’re the 1927 Yankees or 2019 Nats, you’re going to be hurting,” Dougherty told WTOP. “You can’t really function without your regular guys, so once they came back and were healthy, I felt there was a chance they could go on some kind of run.”

However, even that run somewhat surprised Dougherty.

“They were already in a deep hole, but it was also still early,” Dougherty said. “The sample size wasn’t great, but once the health came around, they obviously had a fighting chance and we saw what happened.”

And once the Nationals started to put it together, Dougherty said he had a lot of fun.

“As a reporter, the worst thing you can cover is a mediocre team,” Dougherty said. “There’s no intrigue. Occasionally, the really bad is interesting because the stories are good. The really good is more fun sometimes because guys are actually more willing to talk about it.

When you’re covering the really bad, it takes some more prying and digging. But covering that team from late May on was a complete joy.”

Plus, there was also enough drama to keep it interesting.

“There were the injuries to Max Scherzer, Dave Martinez’s health scare in the middle of September and the trade deadline when everyone is questioning, ‘Is this what you need for the bullpen?'” Dougherty said. “There was always something with this team.”

The bullpen drama and Scherzer’s injuries played out right through the postseason, during which the Nationals became the first team to win five elimination games in come-from-behind fashion.

It was certainly enough to fill a book. And that’s what Dougherty used to produce “Buzz Saw: The Improbable Story of How the Washington Nationals Won the World Series.”

His answer, according to Dougherty: “You have a great year and you run into a buzz saw, and maybe this year we’re the buzz saw.”

“I used it in my story and went on Twitter and everyone really took to it,” Dougherty said. “I just think that buzz saw quote became sort of the embodiment of the team. I ended up putting it on the cover of the book, so I was grateful he said that, for sure.”

The Nationals were the oldest team in baseball last year, averaging 31.1 years old. However, despite being even older in 2020, there won’t be the grind of a full season this year. Dougherty anticipates a shorter season may actually benefit the team.

“April promised to be hard because of how much guys had pitched into the fall last year,” Dougherty said. “Older pitching arms, for sure, you can kind of push yourselves in the way maybe you couldn’t over the course of an eight-month season.”

And, a shorter season means the Nationals won’t have to dig themselves out of a 19-31 hole this summer. 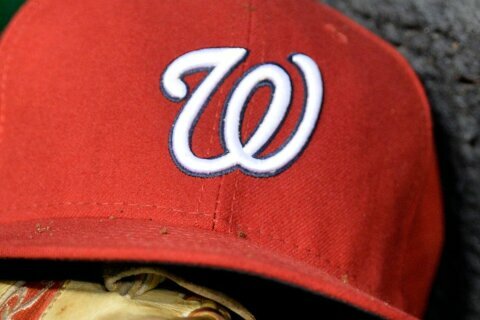