Nationals back home for Game 3 of NLCS 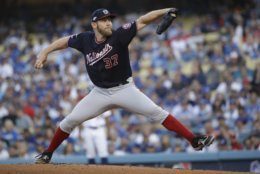 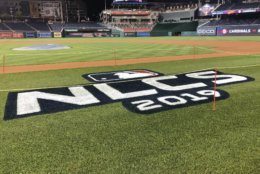 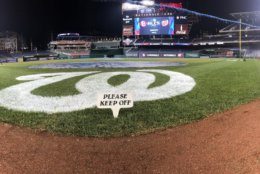 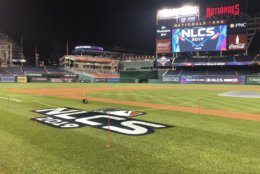 The Washington Nationals have been impressive in the National League Championship Series so far, and now they’re bringing the show back home as they play Game 3 at Nationals Park Monday evening.

This is the first time the Nationals have made it to the NLCS.

They lead the series 2-0 after beating the Cardinals in the first two games in St. Louis. The series is a best of seven, so if the Nationals win two more games they will make it to the World Series.

Fans are encouraged to arrive early for pregame festivities inside and outside the ballpark.

Everyone entering Nationals Park will get a red rally towel featuring the team’s vintage “W” logo.

Stephen Strasburg is scheduled to be the starting pitcher for the Nationals in Game 3.

“They’re having fun,” Nationals Manager Dave Martinez said. “I tell them to take every moment in. I played for 16 years before I got a chance to play in the playoffs, so it doesn’t happen every day.”

The team says fans should consider alternate forms of travel to and from the stadium, including ride-hailing services, the D.C. Circulator from Union Station, biking to the park or the baseball boat from Old Town Alexandria.

While some postseason games may conclude after the last Metro train has departed from the Navy Yard station, Metro is offering extended service Monday night.

The next two NLCS games are scheduled for Nationals Park Tuesday and Wednesday.

For Game 4 Tuesday night, the WNBA championship-winning Washington Mystics will be honored during pregame festivities. Mystics superstar and league MVP Elena Delle Donne will throw out the ceremonial first pitch.