Coronavirus News: Fairfax Co. votes to increase substitute teacher pay | Is it time to get a COVID-19 booster? Which one? | Local cases of COVID-19 | How many in DC region are vaccinated?
Home » Washington Nationals » 86’d until now: Washington…

86’d until now: Washington gets first World Series since 1933

Eighty-six years have passed since the last time the World Series was played in Washington D.C. Needless to say, plenty has changed in the world of baseball and beyond since.
Listen now to WTOP News WTOP.com | Alexa | Google Home | WTOP App | 103.5 FM
(1/2) 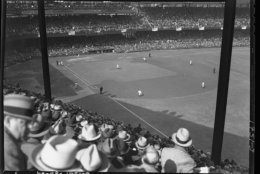 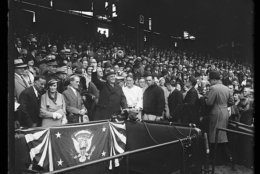 It’s been 86 years since the last time a World Series was played in Washington.

That was two iterations of ballclubs and an entirely different league ago, featuring the original Washington Senators of the American League, pitted against the long-since relocated New York Giants.

The first iteration of the Senators moved to Minneapolis in 1961 and became the Minnesota Twins, while the new Senators operated for 11 more (dreadful) seasons in Washington before jettisoning for the Lone Star State to become the Texas Rangers.

The Montreal Expos arrived following the 2004 season and began play as the Washington Nationals in 2005, calling RFK Stadium home for their first three years before moving into their current ballpark along the Anacostia, where they’ve played for the last dozen years.

How different were things back in 1933? Here are a few historical markers to help show just how much baseball, D.C. and the world has changed.

Stock Market: The Dow Jones industrial average closed 1933 at 99.9. Yes, less than 100, which was actually a remarkable 66.7 percent improvement over the previous year, when it bottom out at the depths of the Great Depression.

Home ballpark: Griffith Stadium, flanked by Georgia Ave. on the east, Florida Ave. on the south, W St. to the north, and 5th St. to the West, on the site of what is now Howard University Hospital, just off the east edge of the U St. corridor. It was also home to the Negro Leagues and the NFL before being demolished in 1965.

Number of MLB teams: 16. Yes, Washington won 99 games to take the American League pennant, but they only had to beat out seven other clubs. The Senators finished seven games up on the Yankees to earn the right to play for the World Series.

MLB home run leader: Jimmie Foxx, 48. Babe Ruth finished second with 34, but only seven players hit as many as 20 between both leagues combined. While this year’s MLB home run leader, Pete Alonso, hit a comparable 51, there were 129 players who hit 20 or more in 2019. Even accounting for the 14 more teams and slightly longer schedule, the difference is massive.