Editor’s note: The video contains language that may be offensive to some viewers.

The moment that many Nationals fans dreaded came Tuesday: Bryce Harper returned to Nats Park … in a Phillies uniform.

A ballpark nearly full of boo birds welcomed the superstar outfielder back to D.C. Tuesday night. And while the man is definitely getting paid, he couldn’t buy a hit in his first at-bat against former teammate Max Scherzer, who struck him out swinging.

The Nats didn’t mince words either posting this to their Twitter account. And in the words of the Fresh Prince, nonetheless. That’s cold.

Yo homes, smell ya later. pic.twitter.com/3Jf1aR8mJq

Harper had the last laugh, though. He crushed a long home run in his final at-bat and the Philadelphia Phillies beat the Nationals 8-2 Tuesday night for the franchise’s best start in over a century.

And, to add insult to injury, Nats shortstop Trea Turner exited the game in the first inning with an injury, which was diagnosed as a nondisplaced fracture; and first baseman Matt Adams left in the fourth inning with back spasms.

Cut Nats fans some slack if it seems like a harsh welcome. They certainly didn’t need a reminder that their former franchise player is, well, another franchise’s player now. And they probably haven’t forgotten the numbers that stole him away just a month ago: 13 years, $330 million.

Perhaps in anticipation of those boo birds, Harper finally posted some gratitude to the D.C. fan base on Instagram Tuesday morning. Local restaurants were even namechecked, one assumes, because he still eats sandwiches that aren’t cheesesteaks.

Clad in a hat saying “Positive Vibes,” Harper chatted with reporters before the game Tuesday.

“I think there’ll be some boos and things like that,” he said. “But that’s part of the game, and I think I’ll get some cheers as well. And, like I said, I’ll always remember the memories we had here.”

Outside the ballpark before the game, some fans were thinking more about the now than the then.

“I don’t like him,” said one fan from Leesburg, Virginia. “He did a good thing for himself. But, I mean, he kind of hurt the team.”

Another fan from Alexandria mused that he might wear a Harper shirt to another Phillies game with the name crossed out in marker. “That’d be fun,” he said. 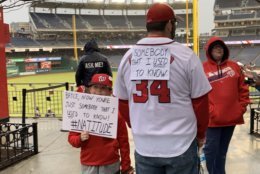 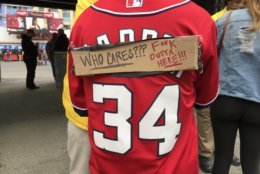 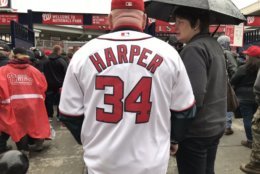 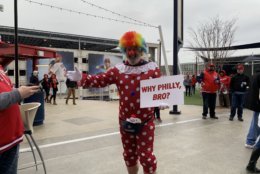 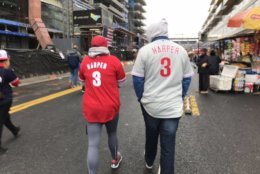 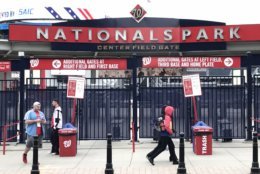 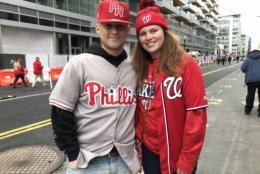 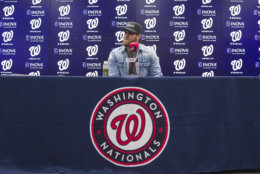 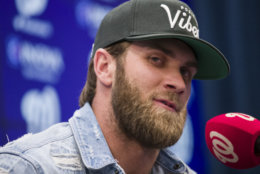 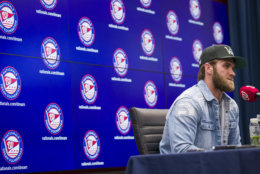 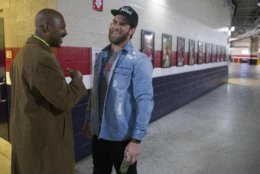 Still, there are fans who still appreciate the homers and the hustle Harper showed here in D.C. One 12-year-old vowed to never tear up a batting glove that Harper tossed to him.

One fan said that she booed Harper when he came to bat but that it hurt her heart to do so. And another fan from La Plata, Maryland, showed D.C.’s trademark diplomacy when asked what he’d say to the superstar.

WTOP’s Michelle Basch, Noah Frank and The Associated Press contributed to this report.