Bryce Harper bruised bone, does not have ligament or tendon damage 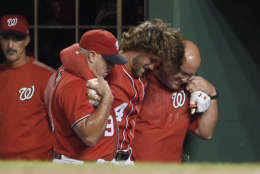 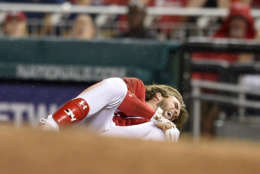 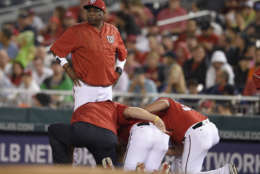 Harper should be back by the end of the season, Rizzo said.

Rizzo, who spoke to the media, said Harper will be placed on the disabled list.

The injury in the rain occurred Saturday night in the first inning of Washington’s eventual 3-1 win over San Francisco when Harper slipped on the first base bag, then hyperextended his left knee, before crumpling to the ground, and clutching the knee in pain.

Harper was helped off the field, while putting no weight on his left leg.

Manager Dusty Baker said after the game that everybody had the same reaction.

Baker went so far as to ask for prayers from baseball fans for the health of one of the sport’s top players and a potential NL MVP candidate. Harper, the 2015 MVP who is hitting .326 with 29 home runs and 87 RBIs as the most fearsome hitter in the league this season, did not speak to reporters after the game.

The Associated Press and Colleen Kelleher contributed to this story.