Nats get Madson, Doolittle from A’s for Treinen, prospects 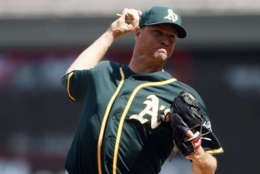 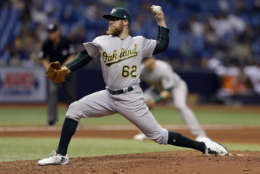 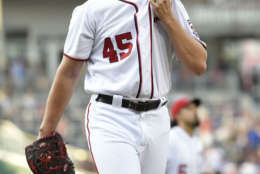 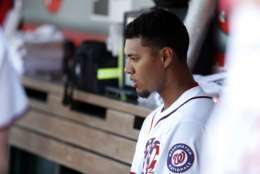 CINCINNATI (AP) — Looking to fortify a bullpen that has blown more than a third of its save chances, the Washington Nationals acquired relievers Ryan Madson and Sean Doolittle from the Oakland Athletics for right-hander Blake Treinen and a pair of prospects.

Left-hander Jesus Luzardo and infielder Sheldon Neuse were sent to Oakland as part of Sunday’s deal.

A 36-year-old right-hander, Madson has a 2.06 ERA and is seventh among relievers in hits plus walks per inning at 0.79. He has not allowed any of the seven inherited runners to score in his past 13 appearances and has held opponents to a .188 batting average.

“We got two quality human beings who are great teammates,” Washington general manager Mike Rizzo said. “They can pitch at the end of games and get three outs. We can stabilize our entire bullpen.”

Rizzo said he wasn’t sure when Madson and Doolittle would be joining the Nationals.

NL East-leading Washington has a strong rotation led by Max Scherzer (11-5), Stephen Strasburg (9-3) and Gio Gonzalez (8-4) but has converted just 22 of 36 save chances. Bullpen issues helped lead to the Nationals’ elimination in the NL Division Series in 2012, 2014 and 2016. The Montreal Expos/Nationals franchise has never reached the World Series.

Washington manager Dusty Baker said he had talked to Madson and Doolittle by the time the Nationals finished their 14-4 win over the Reds on Sunday.

“They’re extremely excited to get into the mix and pitch for a contender,” Baker said, choosing not to name one of them the closer. “They both have had arm problems, so it could be both of them.”

Daniel Murphy, who homered twice on Sunday, was also excited about the new additions.

“It’s always nice to add two quality players, and those guys are really good players,” he said. “You hate to give up a guy like Blake, but you’re not going to get anything for free. We gave up one quality player and got two.”

Nationals closer Koda Glover converted eight of 10 save chances but has not pitched since June 10 because of severe inflammation of the rotator cuff. Treinen, 29, started the season as Washington’s closer and is 0-2 with a 5.73 ERA in 37 relief appearances, allowing opponents a .320 batting average.

In addition, the Nationals must pay $250,000 assignment bonuses to both pitchers.

Neuse, a 22-year-old who plays shortstop and third, was a second-round draft pick in 2016 and is hitting .291 with nine homers and 51 RBIs at Class A Hagerstown in the South Atlantic League.

Luzardo, 19, was a third-round draft pick in 2016 and is 1-0 with a 1.32 ERA at the Gulf Coast Rookie League Nationals in his return from Tommy John surgery on March 22 last year.

Washington right-hander Joe Ross, who is to have Tommy John surgery on Wednesday, was transferred to the 60-day disabled list. Oakland selected the contract of right-hander Simon Castro from Triple-A Nashville.

Oakland manager Bob Melvin said losing pitchers of the caliber of Madson and Doolittle is the cost of rebuilding.

“Losing those two guys will be tough, and I know the guys will feel it a little bit too, but we’re in a little different course right now, and we really like the guys that we’re bringing back,” Melvin said. 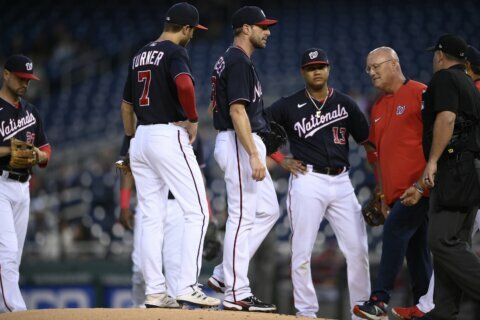