After signing with the Washington Mystics to a multi-year deal in free agency, Alysha Clark will be missing the entire 2021 season due to a Lisfranc injury of her right foot.
Listen now to WTOP News WTOP.com | Alexa | Google Home | WTOP App | 103.5 FM

After signing with the Washington Mystics to a multi-year deal in free agency, Alysha Clark will be missing the entire 2021 season due to a Lisfranc injury of her right foot.

The team announced that Clark suffered the injury while playing overseas in Lyon, France and will have surgery in the upcoming weeks.

Clark came to Washington after winning two championships in the past three years with the Seattle Storm. It was a move that head coach and general Mike Thibault had been longing for over the past several seasons. The opportunity finally presented itself this offseason when she decided not to return to Seattle and she came to D.C.

“There aren’t any simple words to express how badly we feel for Alysha,” Thibault said in a statement. “She was very excited to get started with us this season and now will have to wait a year. Obviously, she was a big piece of our off season planning and will be sorely missed. Throughout her rehab, Alysha will remain an integral part of our leadership group and her mentoring of our younger players will be crucial as we move ahead. We look forward to her coming back healthy and being a factor in our success for several years to come.”

Throughout her career, she has established herself as one of the premier defensive players in the entire WNBA. Twice the 5-foot-11 forward has earned All-Defensive Team honors, both coming in the past two years.

Related: Alysha Clark signing was years in the making

Clark’s addition was going to bolster the defensive identity of the team that already had two All-Defensive honorees in Natasha Cloud and Ariel Atkins.

Bringing in Clark also prevented the Mystics from re-signing Aerial Powers. The reported contract for two-years, $366,000 was the largest of Clark’s career and the third-highest on the active roster. Earlier in the offseason, Thibault noted that Powers was a priority to re-sign but with so much money committed to Clark, it made it difficult to make it all work under the salary cap. Powers would go on to sign with the Minnesota Lynx on a three-year, $588,801 contract – the most of her career.

There will be a huge hole to fill for Washington at the forward position. Clark was expected to fill a prominent role in the starting lineup. That role was increased after LaToya Sanders announced her retirement before the start of the season and the increased likelihood that Emma Meesseman will not be playing at the beginning of the year. 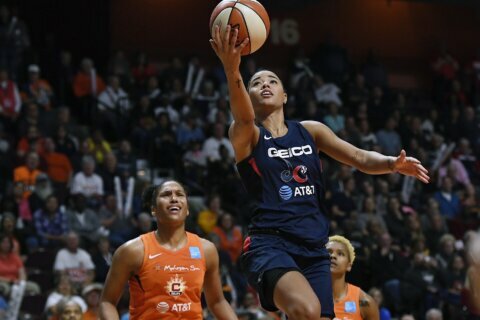