Taylor Heinicke and Kyle Allen, along with 14 other Washington players yet to clear the NFL's health and safety protocols, did not travel with their teammates to Philadelphia, head coach Ron Rivera confirmed Tuesday morning.
Listen now to WTOP News WTOP.com | Alexa | Google Home | WTOP App | 103.5 FM

Heinicke, Allen in Washington still while team is in Philadelphia originally appeared on NBC Sports Washington

Taylor Heinicke and Kyle Allen, along with 14 other Washington players yet to clear the NFL’s health and safety protocols, did not travel with their teammates to Philadelphia, head coach Ron Rivera confirmed Tuesday morning.

While the Washington Football Team already arrived in Philadelphia ahead of its Week 15 divisional matchup against the Eagles, Rivera told the Sports Junkies on Tuesday morning that Heinicke and Allen have remained quarantined in D.C. until they clear COVID-19 protocols.

Should Heinicke and/or Allen test negative ahead of the 4:00 p.m. gameday transaction deadline, Rivera said they would then travel to Philadelphia for Tuesday night’s game. While the old protocols required two negative tests 24 hours apart before vaccinated, asymptomatic players could be cleared, the NFL’s updated policy allows for a quicker turnaround.

While Heinicke and Allen are still awaiting their tests to come back after testing at the team facilities, Rivera said half the team’s tests are already en route to the lab. Still, as experienced backup QBs, Rivera said as long as they’re in the game planning meetings – which have been held completely virtually – they don’t need a lot of pregame reps.

“There’s not much you can do about the situation, so you might as well make the most of it,” Rivera said. “I’m looking forward to tonight. I won’t know who’s available until 4:00, but I’ll tell you all we need is all we have.”

If Heinicke and Allen aren’t cleared, 30-year-old journeyman Garrett Gilbert is expected to get the starting nod over Kyle Shurmur thanks to his familiarity with Rivera’s system from their days in Carolina together. Despite losing the backup job to Heinicke with the Panthers, Gilbert knows Rivera’s playbook well enough to be option No. 1 if it comes to that.

Last season with Dallas, with Dak Prescott injured, Andy Dalton on the reserve/COVID-19 list, and Ben DiNucci struggling, Gilbert nearly led the Cowboys to victory against the Steelers. He threw for 243 yards plus a touchdown and interception in a 24-19 game.

“He came back and picked everything up right away…He’s a steady quarterback and he’s got the arm strength so he can make all the throws,” Rivera said.

Washington also will be without seven coaches on the sideline due to COVID-19 protocols. Still, Rivera’s ready to make the most out of what he has in another uncertain predicament.

“You feel like you have a chance, but you just never know. Nobody can predict this,” Rivera said. “We just got to go through and continue to do the protocols. We’ll see what happens, I mean that’s the biggest thing everybody has to understand. There’s no telling what’s going to happen.” 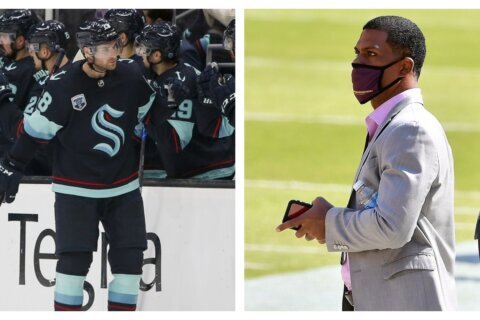