Holidays: Where to see holiday lights | Santa's back with inflation, inclusion on his mind | 4 ways to limit your holiday debt | Inflation 'definitely a guest' at holiday celebrations this year
Home » Washington Commanders » Delving fully into Ron…

After Week 5’s loss to Tennessee, Ron Rivera once again told reporters that his rebuild of Washington won’t happen “overnight” but will work “eventually.” It’s a talking point he’s deployed often since taking over the franchise in 2020, but with the club starting Rivera’s third year in charge at 1-4, it’s also a talking point that’s getting old.

The notion that every other organization in the Commanders’ division has seemingly lapped Rivera’s in terms of their respective turnarounds is only increasing the scrutiny on him.

The Giants are 4-1 under new coach Brian Daboll, while the Eagles went to the playoffs in their debut campaign with Nick Sirianni and are now 5-0 in 2022. Then there are the Cowboys, who are 4-1 themselves and feature Mike McCarthy, a veteran head man like Rivera who accepted the job there in the same offseason that Rivera did.

When asked Monday to explain why Washington’s progress doesn’t match that of the NFC East’s other members, Rivera initially gave a one-word response.

That sparked a lot of further discussion.

Dallas, for example, lost Dak Prescott in the opener and has since relied on Cooper Rush at signal-caller. Rush, by the way, was waived during final roster cuts this summer before re-signing with McCarthy’s practice squad. While Rush is certainly doing his part, he’s clearly not the Cowboys’ Plan A — and yet they’re still thriving.

That context was laid out for Rivera, who came back with this.

“They started with Dak, and they build around Dak, and the offense is built around Dak,” he said. “Their backup’s a guy that’s very solid inside of it, inside of what they do. And the truth is this is a quarterback-driven league, and if you look at the teams that have sustained success, they’ve been able to build it around a specific quarterback.”

Daboll, for what it’s worth, isn’t directly tied to New York’s Daniel Jones (Jones was drafted two regimes ago, meaning Daboll hasn’t necessarily centered his plan around the passer). Plus, Jones has only thrown three touchdowns in five contests, numbers that suggest he’s not primarily responsible for the Giants’ victories. Rivera didn’t touch on that on Monday, however.

From there, Rivera was pressed on whether he was second-guessing his choice to trade for Carson Wentz, whom the Commanders acquired in March in exchange for multiple high draft picks. After all, he cited quarterback as the primary factor for his rivals’ ascension and his group’s lack of one, right?

“No, I don’t have any regrets about our quarterback,” Rivera said. “I think our quarterback has done some good things. There’s been a couple occasions that he’s struggled, but you look at his numbers from yesterday and he was OK.

“There was a time he was very solid and then we had the unfortunate Philadelphia game and then he struggled a little bit in the Dallas game,” he continued. “But the way he performed [Sunday], it just shows you what he’s capable of. We chose him because we looked at what we felt were things that pointed towards him.”

Rivera experienced a brief reprieve from rebuild-focused and Wentz-focused questions, but before he exited the media room, he was given an opportunity to clarify his stance on Wentz specifically.

Ever since the swap with Indianapolis for Wentz, Rivera has trumpeted that the 29-year-old is someone Washington wanted. That’s a message Rivera delivered to Wentz when he arrived to the facility and he’s reiterated it at other various junctures. That hasn’t changed, he claimed.

According to Rivera, his frustration about the Commanders’ place in the standings isn’t directed at Wentz. Instead, it’s because of the need to better surround Wentz with extra talent, with the hope that those two parts of the equation will add up to consistent winning.

“This is an opportunity,” Rivera said. “Now we have a guy that we think we have a chance to build around. We had a guy in [Ryan Fitzpatrick] and he gets hurt in the first quarter and a half into the season, so it was a little different. I just think right now we have a guy that’s really growing in what we’re doing. I thought [Sunday] was a good indicator of his potential for us in this and we’ll continue to work with it.”

To close out his stint at the podium, Rivera faced an inquiry about why other areas of the depth chart weren’t strengthened to a satisfying degree while the search for a worthy quarterback was ongoing. It’s possible to perform the former during the latter.

Rivera countered by declaring that Washington does have help elsewhere and that the crux of the issue is that Wentz must develop chemistry with his teammates.

In all, Monday’s presser was one of the most uneasy sessions of Rivera’s Commanders tenure. And though he didn’t abandon Wentz despite his short, first answer reading like he did, his remarks were not exactly inspiring.

Also, as a reminder, it’s only Oct. 10. There is still more than two months left on the schedule. 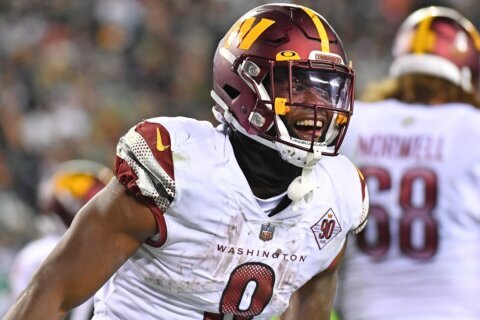 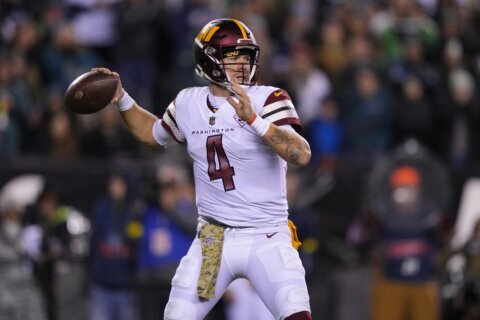