As the Commanders go about their preparations for Jalen Hurts and his 2-0 Eagles' visit to FedEx Field, Ron Rivera is accentuating one word in particular.
Listen now to WTOP News WTOP.com | Alexa | Google Home | WTOP App | 103.5 FM

When looking ahead to Washington’s upcoming matchup with Philadelphia and Jalen Hurts this Sunday, Daron Payne couldn’t help but look back first.

Payne, along with his fellow interior lineman Jonathan Allen, overlapped with Hurts at the University of Alabama. While Hurts’ sizzling start to the 2022 NFL season — including his recent, masterful Monday night effort against Minnesota — might be surprising to some if not most who follow the league, Payne himself isn’t all that taken aback by it.

“We had to practice against him,” Payne said Wednesday. “We had to get yelled at by Coach Saban for containing him all the time, so I knew he was capable of doing all these things. Now he’s on the team that we’re playing against, so it’s another challenge.”

Through the Eagles’ first two outings, Hurts is completing 69.8% of his throws and averaging 288 yards per start. Unfortunately for his opponents, that production as a passer hasn’t impacted his rushing numbers; he’s already compiled 147 yards and a pair of touchdowns on 28 runs.

As he and the Commanders go about their preparations for Hurts and his 2-0 squad’s visit to FedEx Field, Ron Rivera is accentuating one word in particular.

The worry among those who support Washington is that the club’s NFC East rival is specifically built to exploit its defense’s greatest weakness.

Coordinator Jack Del Rio is currently overseeing a unit that’s giving up 7.5 yards per carry, which is the worst mark in the sport so far.

What’s worse is that the Commanders’ first two foes, the Jaguars and the Lions, were able to gash them repeatedly despite the lack of a two-dimensional quarterback, meaning they’ve yet to encounter a skill set like Hurts’ this year.

“It’s definitely an extra stressor,” Payne said of facing a signal-caller such as Hurts.

Between Hurts, Miles Sanders, Boston Scott and Kenneth Gainwell, the Eagles can get very creative with their ground game, from read-option concepts to inside and outside calls to play-action shots (the last of which enables wideouts AJ Brown and Devonta Smith, along with tight end Dallas Goedert, to thrive).

That’s why Rivera’s focusing on discipline, and at least on Wednesday, his players seem to be grasping the message.

“I have to make sure I do my job, because as soon as I bust my job, the people behind me are screwed,” James Smith-Williams said. “So it starts up front.”

Of course, understanding the importance of that while hanging out in the locker room couldn’t be more different than being able to execute it in the second half when Hurts’ crew is operating at full speed.

Plus, who exactly will be contributing on the hosts’ defensive line is still unsettled. Jonathan Allen practiced in full on Wednesday but he is dealing with a groin injury that pushed his status to questionable before the Detroit loss. Meanwhile, reserve options Casey Toohill (concussion), Daniel Wise (ankle) and Shaka Toney (illness) were all absent from Wednesday’s session.

Such is life in pro football, though. Philadelphia won’t take any pity on Washington, nor do the Commanders expect them to. Instead, the defense — no matter who’s suiting up and no matter what the Eagles present post-kickoff — must be consistently locked in on every assignment and not get impatient or over-aggressive. 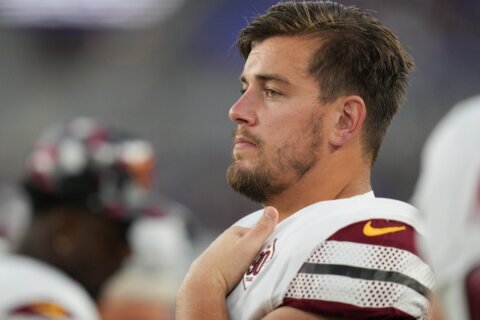