Terry McLaurin’s rise to stardom is a true underdog story.

McLaurin was a four-star recruit in high school, but he had just three Power-Five offers before earning himself a scholarship to Ohio State. He hardly played on offense during his first three college seasons and didn’t earn a prominent role in the offense until 2018, his fifth and final season in Columbus.

Washington selected McLaurin in the third round of the 2019 NFL Draft, but truth be told, no one could have predicted his ascendance to one of the league’s best young receivers just three seasons later. That’s why on Wednesday, as McLaurin took the podium in Ashburn just one day after officially signing a three-year extension worth north of $70 million, his emotions were running high.

“I cried some real tears. For a lot of my life, I’ve really had to grind and work for what I have now. I’ve had a lot of adversity and some people didn’t really believe in my abilities,” McLaurin said. “My faith, that sustained me. My people, my village, the people that were praying for me, sacrificing for me, my family, my girlfriend, my homies back in Indianapolis. I’ve had so many people [responsible] for the reason I’m standing right here today. I wouldn’t be here without them.”

McLaurin proceeded to specifically single out his parents, citing them as to where his tireless work ethic comes from. The wideout reminisced on seeing them “get up and never miss a day of work.” After signing this extension, McLaurin has put his parents in a position where they no longer have to work, which he called “a blessing.”

Yet, no matter how much of a pay raise McLaurin has received, the 26-year-old has not lost sight of the work he put in to get himself into his current situation.

“While this is great financially for myself, I just love the grind, man. I really do,” McLaurin said. “The adversity is what’s gotten me here. The adversity I went through in college, in high school and in the NFL, kind of being an underdog, the reason why I’m here is because of the work that was put in during those times.”

Over the past couple of months, McLaurin admitted it was hard to be away from the team while contract negotiations were taking place. The wideout skipped all of Washington’s offseason program, including mandatory minicamp that took place in mid-June.

During that span, McLaurin said he was working out daily in Florida, keeping himself in shape in case a new deal came together while the offseason program was still going on. He remained in contact with multiple players on the team throughout the process, especially Jonathan Allen and Logan Thomas, who both went through contract negotiations last summer.

Throughout the offseason program, Commanders’ head coach Ron Rivera remained confident a deal would get done, even if it took time. Every time he was asked, Rivera would reiterate just that. That same level of confidence was felt from McLaurin’s camp, too.

“I felt confident, honestly,” McLaurin said. “Talking to my agent, to the conversations I’ve had with coach Rivera. It was very evident that they wanted me to be here and I wanted to be here.”

Following one offseason practice, Rivera directly called McLaurin and the two had an honest conversation about the situation. It was after that specific moment when Washington’s standout receiver felt a deal was coming soon.

“We had a really good conversation. He emphasized that it was a priority, from ownership down to the coaching staff, to get this deal done,” McLaurin said. “Just with the business of the NFL, you never know until you know. But I had a great feeling that we were going to get something done. Just for him to reach out, take time out of his day to hear where I was coming from, how I was feeling personally, where my head was, I really appreciate that coming from the head coach and the leader of the football team.”

McLaurin touched on the business aspect of the NFL multiple times during Wednesday’s podium session, but also made it clear he truly did want to remain in Washington. Yes, McLaurin wanted to be compensated for what he felt he deserved, but he’s also just as thrilled that it’s with the same franchise that drafted him.

“I feel like to coach Rivera’s credit and the staff here that we have a really unselfish group of guys in that locker room,” McLaurin said. “We have a lot of guys who are competitive and hungry. And they want to see Washington be back on top. We all know where we want to head to. And I think we’re all on the same page with that. But we also understand that it’s going to take the work and dedication from everybody involved to get there.

“I want to be a part of that,” he continued. “It’s a place where I was drafted to. A place where the fans show me so much love and appreciation and are so passionate about just this fan base and this organization and the history of it — something I wanted to be a part of, especially with where we’re at now and where I feel like we’re heading.”

Rivera stood just a few feet to McLaurin’s left throughout the 30-minute press conference on Wednesday. A slight grin remained on the head coach’s face for much of the session, as Rivera didn’t even need to hide just how big of a moment extending McLaurin means for this football team.

“It’s one of those things as a football coach to be able to have players that fit what you’re trying to do and understand, and really kind of see the vision that you have. And with Terry that’s somebody that we believe we have,” Rivera said.

It’s no secret that this extension is life-changing for McLaurin, both on and off the field. But the grind and all the adversity he’s had to go through until this point won’t be lost on the receiver, either, just because he’s earned this lucrative contract.

“I’m just really excited for what’s to come and to continue to get back out there and really go back out there with my day one approach of earning my spot on this team like I was my rookie year,” McLaurin said. “I’m trying to earn it all over again. That’s genuinely my perspective and how I operate each and every day.” 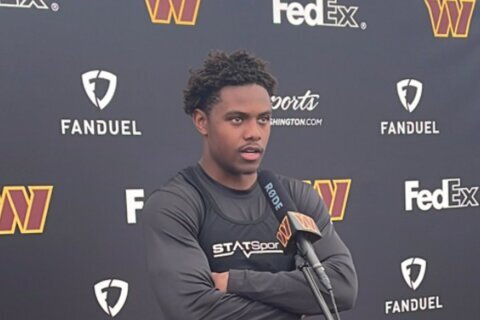 Camp observations, 8/10: The first true scuffle of the summer breaks out 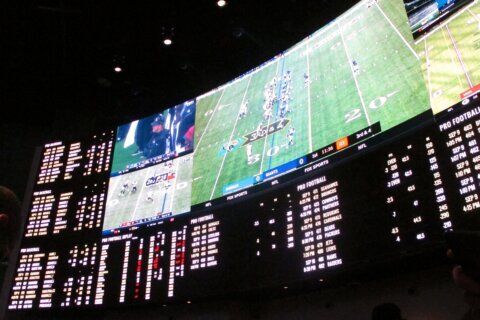