Commanders players and coaches have both voiced their optimism over the fate of the team this year but that excitement extends beyond Washington.
Listen now to WTOP News WTOP.com | Alexa | Google Home | WTOP App | 103.5 FM

As with any NFL offseason, there are question marks aplenty surrounding the Washington Commanders heading into 2022. Will Carson Wentz revert to his MVP-caliber days? Will the defense perform up to expectations?

Excitement certainly is not in short supply in Ashburn this summer, as players and coaches have both voiced their optimism at the fate of the team this year. That optimism isn’t contained locally, though.

“The Washington Commanders are gonna win the NFC East in my opinion, in my humble opinion,” said Robert Turbin, former running back who enjoyed an eight-year NFL career and won Super Bowl XLVIII with Seattle in 2014.

Turbin then went bullet-by-bullet, detailing his reasoning why the Burgundy & Gold have what it takes to overcome Dallas, New York and Philadelphia this season.

“First things first, they brought back Terry McLaurin, their bigtime receiver,” Turbin said. “[They] acquired Carson Wentz, so now he’s got his number one target. It’ll be interesting to see how that chemistry develops over the course of not only training camp, but obviously this season.”

McLaurin’s status caused some perspiration among Washington fans this offseason, but eventually the team was able to lock in their best offensive player to a three-year, $71 million extension late last month. McLaurin bolsters a talented receiving core, complemented by rookie wideout Jahan Dotson who has already shown to develop chemistry with Wentz.

Though McLaurin and Wentz haven’t shared the field yet (the former’s contract was inked after he sat out OTAs and minicamp), their partnership is an appetizing situation for both parties. McLaurin gets arguably the most talented QB he’s played with over the course of his three-year career, while Wentz will have one of the best receivers in the NFL on his side on all route depths.

The other side of the ball presents opportunity for the Commanders as well.

“Defensively, you get Chase Young back to add to that pretty good defensive line,” Turbin said. “Obviously, he was injured, tore his ACL last season. But man, this defense is gonna be good. Jonathan Allen, career high nine sacks last season. Daron Payne, 14.5 sacks since 2019, so they’ve got a really good front.”

Though depth is a concern for Washington’s defense, their top-loaded group is still one of the most talented in the league if they can stay healthy. Young hopes to be ready to play by Week 1, while Allen’s leadership along with Payne and Montez Sweat shore up both sides of the line. They underperformed as a unit last year, but have an opportunity to step up in 2022.

Higher up on the team ladder lies one crucial piece of the puzzle.

“Ron Rivera is the key here. He’s the icing on the cake,” Turbin said. “Defensive-minded coach, two-time NFL coach of the year. He’s a consummate professional, he gets his teams to play consistently, and he’s really the big reason why he’ll get that team over the hump and win the NFC East this year.”

Washington’s quest is aided by the fact they have the easiest schedule in the league this season. That won’t matter, though, if their question marks aren’t answered or if certain position groups struggle like they did last year. 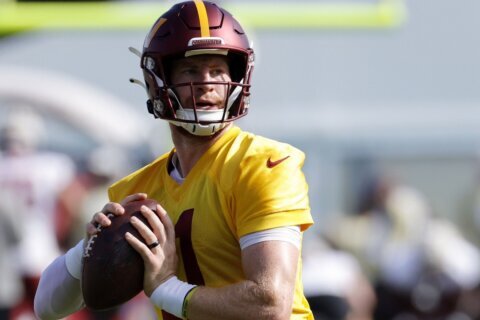