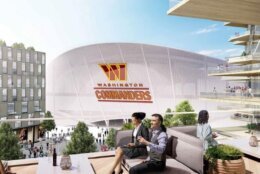 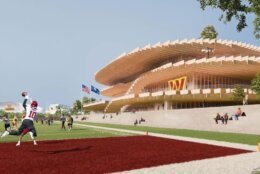 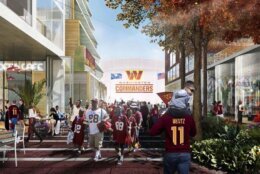 State and county officials are sharing concerns over the Washington Commanders’ possible plans for a new stadium complex in Woodbridge.

On May 23, documents detailing the massive entertainment and stadium project were reported first by ESPN, showing what the possible 200-acre development just off Interstate 95 in Prince William County could look like if the franchise receives land-use approvals and finalizes its property acquisitions, reported to be worth more than $100 million.

But by May 24, some elected officials were telling InsideNoVa they had more questions and concerns than anything else, particularly with regards to transportation and roadway congestion along what is already one of the worst stretches of interstate in the country.s

“Traffic and transportation and transit options are obviously key today, without a stadium,” said State Sen. Jeremy McPike, D-29th. “The big question, of course: What about transit improvements? What about transportation improvement? Those are huge, huge questions. … It’s something I want to hear from constituents on. It’s obviously a lot of moving parts, a lot of questions. I have concerns and we’ll see what they have to say.”

The proposed complex – which includes the stadium, a Commanders practice facility and team headquarters, as well as a retail and entertainment development – would sit just northwest of the I-95 and Prince William Parkway (Route 294) interchange.

Sources told multiple media outlets that other sites remain in consideration for the Commanders’ new stadium, including another one in Prince William, at Potomac Shores, as well as one in the Sterling area of Loudoun County near Dulles International Airport. The team is currently based in Ashburn but plays its games at FedEx Field in Landover, Md.

The Woodbridge site would span several parcels with different owners, among them private entities as well as Prince William County, the commonwealth of Virginia and the Fairfax County Water Authority. The project would include property that is currently used for the Horner Road commuter parking lot.

Project renderings obtained by InsideNoVa, meanwhile, show a covered stadium that could be used during all seasons for big-ticket concerts and other events, well beyond the eight or nine home games that the Commanders typically play in a year.

For some officials, there will need to be new changes and alternatives to the already traffic-choked stretch of I-95 before the plan can receive a go-ahead.

“This entertainment complex is a real opportunity for Prince William County, but transportation is the biggest variable that needs to be solved,” State Sen. Scott Surovell, D-36th, told InsideNoVa.

Surovell said he hopes that if negotiations proceed and the Commanders ultimately decide to pursue the location, the move would “jumpstart the conversation about getting the [Metro] Yellow Line extended to Potomac Mills, which we’ve been trying to jumpstart for a decade now.”

A Virginia Department of Rail and Public Transportation feasibility study last year for potential new transit options between Springfield and Quantico seemed to conclude that an extension of the U.S. 1 bus rapid transit line in Fairfax would be best for the corridor, estimating that a Metrorail extension to Quantico could cost as much as $27 billion. That study was conducted without considering the possibility of a new Commanders complex.

“The Prince William Board has been totally supportive with having that conversation [on Metro]; the Fairfax Board has been a little more slow to engage,” Surovell told InsideNoVa.

At the same time, many county leaders are simply saying nothing. Local officials were more reluctant to discuss the leaked plans thus far, citing the lack of any formal submissions from the team.

Prince William Board of Supervisors Chair Ann Wheeler and Woodbridge Supervisor Margaret Franklin declined to comment on the proposal. Occoquan Supervisor Kenny Boddye, whose district includes the properties, told The Washington Post that no formal applications had been submitted to the county, and he declined further comment to InsideNoVa.

In a statement, Christina Winn, Prince William’s economic development director, said, “No decision has been made on a new stadium in Prince William County. As far as we understand, the team is exploring all of their options, including where they currently own land. While this news doesn’t mean the team has officially chosen Prince William County, we look forward to engaging with the team to ensure any development opportunity would be a good fit for the community and there is a positive economic and fiscal benefit to the county.”

School Board Chair Babur Lateef and Prince William County Schools, which has already acquired several properties for its 14th high school at Minnieville and Telegraph roads, directly adjacent to the potential Commanders site, declined to comment on the matter early this week.

Lateef said he doesn’t have enough information to comment without hearing from the Commanders or understanding their plans more fully. The planned school is intended to provide some much-needed relief for some of the school division’s more crowded high schools on the eastern side of the county and is expected to open in 2025.

“Our current plan for property we own in that area includes a future high school,” Prince William Schools spokesperson Diana Gulotta told InsideNoVa. “We have not been provided with any information directly regarding the limits of boundaries of which properties the Commanders are proposing to purchase, so we’re unable to determine if there is any overlap with our properties.”

The leaked plans could also represent a negotiating tactic for the Commanders – whose front office is currently under NFL investigation for allegations of sexual harassment and financial misdealings – and owner Dan Snyder, one of the most unpopular owners in American professional sports.

The General Assembly is considering two bills that would establish a Virginia Football Stadium Authority, which could issue bonds to pay for the new stadium on Snyder’s behalf. The current bill text is unclear on whether those bonds could be used to finance just the stadium or the entire development. Tax revenues generated by the stadium would then be used to make bond payments.

Legislators are scheduled to return to Richmond on June 1 to finish hammering out differences between the two bills.

The Commanders, estimated to be worth over $4 billion by Forbes, have also been trying to leverage further assistance from Maryland and the District of Columbia for a new stadium.

The football team had the second-worst attendance in the NFL last year, according to ESPN. The 7-10 team drew just 52,571 fans on average for home games at FedEx Field, which has a capacity of roughly 82,000. The team has played there since 1997, and its lease expires in 2027.