Fans of the Washington Football team gave their thoughts following a survey on what the team's new name should be.
Listen now to WTOP News WTOP.com | Alexa | Google Home | WTOP App | 103.5 FM

Fans of the Washington Football Team gave their thoughts following a survey on what the team’s new name should be.

Season ticket holders got different lists of potential names for the team.

Sum Mehrnama wasn’t happy with the 10 name options he got to vote on.

“The new names were not ones that I cared for at all. I think there was one that was Washington, 32, FC, which I’m guessing means 32 football clubs,” he said,

Fan Ted Abela said he would like to stay away from anything with the word red in it.

“Let’s try to be original versus maybe trying to appease some fans so you can potentially keep the fight song,” Abela said, adding that names, such as the Washington Monarchs, the Washington Swifts or the Washington Rubies, made “absolutely no sense” to him.

What he does not want, though, is for the team to pick a name that is potentially related to Native American heritage.

For fan Matthew Duggan, nothing could be worse than the team’s current name. Duggan said that if the team chose the Washington Presidents as the new name, it would be disappointing, but it would still be better than Washington Football Team.

“As a senior fan, I do not want another name. Washington Football still keeps a sense of tradition. And, (in) my honest opinion, is a good bridge between us senior fans, and the younger generations of fans that are upon us now. Our team’s 90th anniversary is in 2022. And, I do not want yet another new name.”

In addition to the list of names, the survey also asked fans what perceptions or connotations the names on the list they got evoked and what they think the new name should make them feel.

Here are some of the names fans got:

WTOP’s Megan Cloherty and J. Brooks contributed to this report. 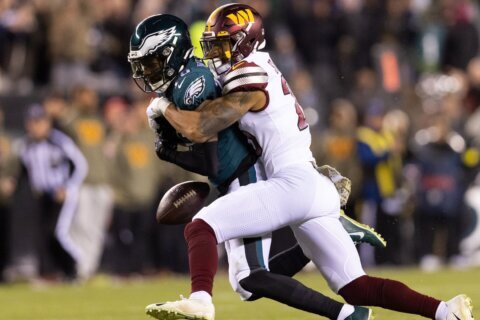