Redskins win at home for first time in 13 months

A lot has happened since the Redskins last won at FedEx Field nearly 400 days ago.

Fast forward to Sunday, and the Redskins celebrated a 19-16 win over the Detroit Lions to improve to 2-9 on the year. The game was not pretty at times, but what has been this season for the Redskins?

Quarterback Dwayne Haskins connected with former Ohio State teammate, Terry McLaurin for 17 yards on 3rd & five with with 26 seconds left in the fourth quarter to set up the game winning field goal. That was one of his best throws of the day, putting the stamp on a six-play, 33-yard game-winning drive.

Haskins struggled with accuracy all day, including overthrowing McLaurin in the end zone in the fourth quarter on a play that would put the game away.

He completed 13 of 29 pass attempts to go along with a fumble and an interception.

McLaurin had a team-high five catches on the day and continues to be one of the lone bright spots in a lost year.

Steven Sims had the play of the day

The rookie returned a kickoff 91 yards for a touchdown, the first kickoff returned for a touchdown by the Redskins since November of 2015. The best part about it was Sims didn’t field it cleanly, he fumbled it, then picked it up and was off.

If Mathew Stafford played in this game, who knows what the outcome would be. The Redskins caught a break with Jeff Driskel under center for Detroit. The defense sacked him six times and intercepted him three times.

Quinton Dunbar had a key interception late in the fourth, setting the Redskins game-winning drive. Fabian Moreau had two interceptions on the day and rookie linebacker Cole Holcomb forced a fumble.

Where was Josh Norman?

Interim Head Coach Bill Callahan said Josh Norman did not start because he has been playing hurt. Keep in mind, Norman was benched last week as well and hasn’t been playing the best football as of late.

Callahan said it was Norman’s decision as to whether or not he would be active on Sunday. He was active but didn’t see the field for an defensive snaps. Callahan also said he wasn’t sure if Norman would be back in the starting lineup once he was healthy.

It was set up perfectly. Haskins had one more play to put an exclamation point on his first win. All he had to do was take the field after Moreau’s second interception and kneel down in victory formation.

The problem was, he was nowhere to be found and Case Keenum had to run on the field and take the snap. Television cameras caught Haskins taking a selfie with the fans when he should have been on the field.

“We were looking for him, too,” Callahan said. “I think he thought the game was over.”

Haskins had a chance to answer the question when he took the podium after Callahan.

Not a great look. 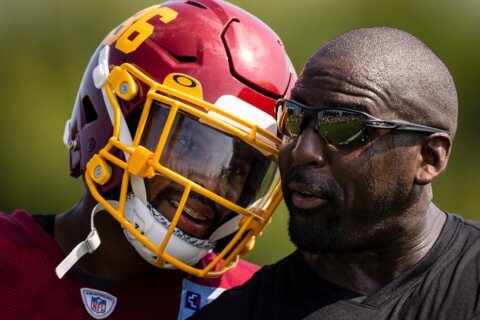