By the numbers: Alex Ovechkin’s road to 800 career goals

As Ovechkin nears Howe’s total of 801 for the second most all time, it’s worth pausing to look back on how he reached the 800-goal club.
Listen now to WTOP News WTOP.com | Alexa | Google Home | WTOP App | 103.5 FM

Alex Ovechkin continued his ascent up the NHL leaderboard with his 800th career goal Tuesday, joining generational icons Wayne Gretzky and Gordie Howe as the only players in league history to ever reach the threshold.

Ovechkin’s dominance has stretched a span of nearly two decades, starting from his very first game with the Capitals as a rookie in 2005 when he announced his presence by scoring two goals in front of a sold-out MCI Center crowd on opening night. His career has intersected with past greats like Brett Hull and Steve Yzerman while setting the stage for today’s young stars such as Connor McDavid and Auston Matthews.

Even as he aged into his late 30s, the Great 8 has remained one of the NHL’s most potent goal scorers. It’s allowed him to climb to the heights of Gretzky and Howe, heights that for decades seemed insurmountable. As Ovechkin nears Howe’s total of 801 for the second most all time, it’s worth pausing to look back on how he reached the 800-goal club.

Here’s a look at Ovechkin’s career totals by the numbers:

Ovechkin has already established himself as the most potent power-play scorer of all time, but he reached 800 with goals in every strength and situation:

Even Strength: 503 – 4th most in NHL history (includes ENGs)

Ovechkin has had 107 different players register an assist on his goals, including 13 who have recorded at least 20 such helpers:

Nicklas Backstrom: 278 – 4th most assists on a single teammate’s goals in NHL history

Ovechkin has scored on 165 different goalies, third most in NHL history behind Jaromir Jagr (178) and Patrick Marleau (177). Fifteen different netminders have allowed 10 or more goals against him:

(+) denotes goaltender is a past Vezina Trophy winner

Having spent his entire career in D.C., Ovechkin has scored against every active NHL franchise except for the Capitals — including the two recent expansion teams in the Vegas Golden Knights (5 goals) and Seattle Kraken (3). He’s scored at least 30 goals against 13 different teams:

Tampa Bay Lightning: 50 – Most by any player vs. TBL

Florida Panthers: 43 – Most by any player vs. FLA

The rise of Ovechkin also brought the Capitals’ ascent into one of the winningest teams of the last two decades. Here are his goals broken down by how they changed the score:

Game-opening goals: 136 – Most in NHL history

Overtime goals: 25 – Most in NHL history

When Ovechkin scores one goal, more tend to follow. Here’s a breakdown of his best individual games and seasons:

40-goal seasons: 12 – Tied with Gretzky for most in NHL history

50-goal seasons: 9 – Tied with Gretzky and Bossy for most in NHL history 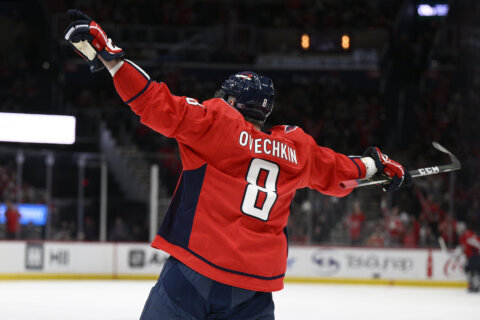