“Sometimes, pucks just don’t go in for whatever reason. Maybe you run into a hot goalie or something like that,” Mangiapane said. “Like tonight, when you get your opportunities, you really got to bear down and finish them.”

“I thought the first period was OK. The second period we didn’t generate anything. I thought at times we shot ourselves in the foot a little bit turning the puck over,” Washington coach Peter Laviolette said. “When we did get it down into the offensive zone, too many one-versus-two, one-versus-three. Not enough two-versus-one, three-versus-one in the battles.”

Washington left-winger Alex Ovechkin played in his 1,300th NHL game. He’s the 14th player to reach that number with one team. He’s a game away from tying Sergei Gonchar for the second-most games in the NHL by a Russian. Alex Kovalev is the leader with 1,316.

With the Flames nursing a 2-1 lead late in the third, Ruzicka and Mangiapane put the game out of reach with goals in a 55-second span.

Ruzicka got behind the defense, corralled Backlund’s high pass with his glove as he crossed over the blue line, then snapped a shot over Lindgren’s glove on a breakaway. Mangiapane’s second of the night came with a one-timer off a drop pass from Dillon Dube.

Already missing six players due to injury, Washington lost two more in the second period. Halfway through, defenseman Martin Fehervary was shaken up when he was hit along the corner boards by Milan Lucic. Shortly after, Kuemper pulled himself from the game after a skirmish with Tyler Toffoli.

Capitals: At Edmonton on Monday night in the fifth of a six-game trip.

Flames: Host Arizona on Monday night in fourth of a five-game homestand. 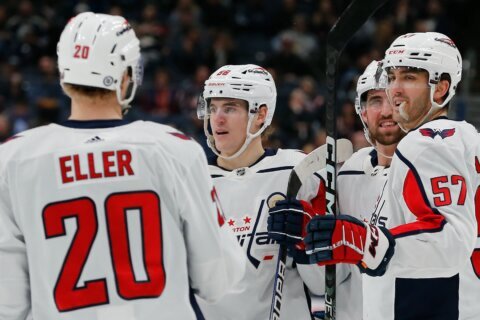 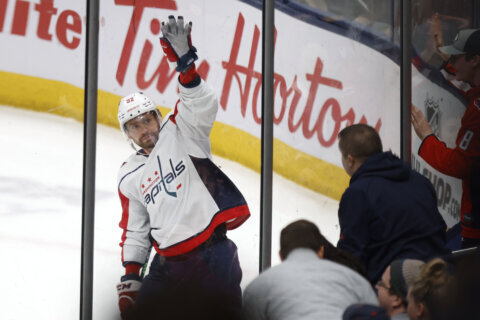