Ovechkin, Capitals rout Flyers 9-2 to win 4th in a row 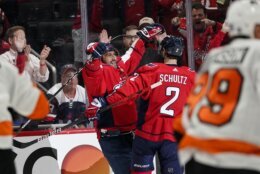 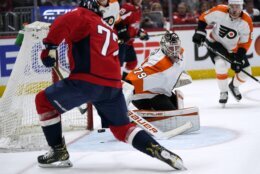 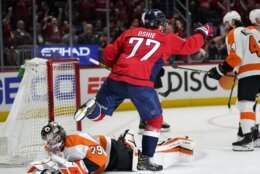 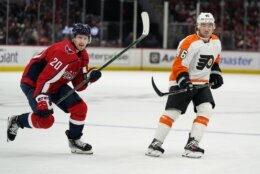 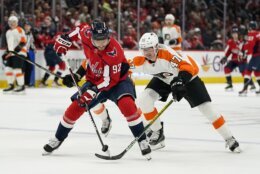 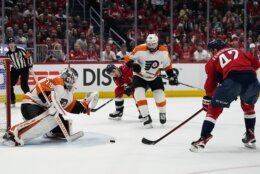 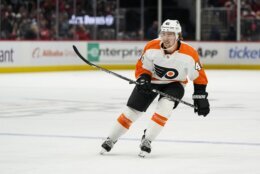 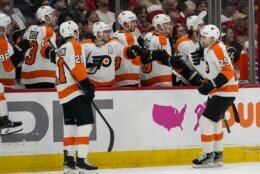 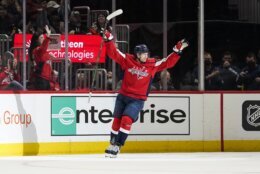 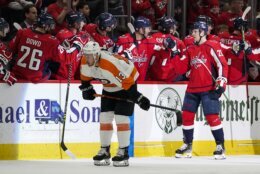 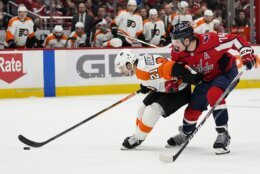 Ovechkin scored for a fourth consecutive game to reach 46 on the season and T.J. Oshie ended a nine-game goal drought to help the Capitals rout the lowly Philadelphia Flyers 9-2 Tuesday night and extend their winning streak to four.

If there was any concern about a trap game against Philadelphia on the eve of Washington’s longest road trip of the season, Ovechkin and his teammates snuffed that out early. The longtime captain scored his 776th career goal six minutes in, and the Capitals poured it on from there.

“I don’t think anyone in there was taking it lightly,” Oshie said. “The score was 9-2 or whatever the score was, but we came downtown here to play a game and play hard and it didn’t matter who we were playing against and that’s very important for us moving forward.”

Oshie added his ninth of the season and Martin Fehervary danced through the defense as part of a span of three goals in 1:52, with Flyers winger James van Riemsdyk scoring on a breakaway in between. The Capitals scored three goals on their first six shots against Carter Hart, who left after the first period with a lower-body injury and was replaced by Martin Jones.

The scoring didn’t stop, either.

Lars Eller scored twice to give himself three in two games, Connor Sheary was left wide open without a defender in 20 feet before going backhand top shelf, and little-used defenseman Matt Irwin cued up his custom goal song, “I Believe in Miracles” by scoring for the first time since Dec. 6, 2018.

“I had a good laugh,” said Irwin, who described his emotions as a mix of excitement and disbelief. “I didn’t think they’d actually put it on, to be honest. But I’ll take it.”

Goals by Garnet Hathaway and Johan Larsson got the Capitals to nine — their highest scoring output of the season and at home in 14 years.

At the other end, Ilya Samsonov was solid in net, making 19 saves to improve to 7-1-0 against Philadelphia. He and Vitek Vanecek figure to split Washington’s remaining nine games fairly evenly before coach Peter Laviolette names a starter for the playoff opener.

Thanks to this four-game run and some struggles by the rival Pittsburgh Penguins, the Capitals can now realistically aim for the third seed in the Metropolitan Division. That would mean a slightly more favorable matchup against the Carolina Hurricanes or New York Rangers, rather than crossing over to the Atlantic for a brutal series against the Eastern Conference-leading Florida Panthers.

To make that possible, the Capitals still need to win games down the stretch. Their next five are away from home, so that will be no easy task.

“We’d love to move up the standings and chase higher,” Laviolette said. “I think the bigger picture is to continue to try to play well.”

The Flyers were recently eliminated from playoff contention, though their realistic chances were gone several months ago. On Tuesday, they celebrated an eighth player making his NHL debut for them this season in Bobby Brink, who won the NCAA championship with Denver three nights earlier.

“It’s really cool,” said Brink, who helped set up van Riemsdyk’s second goal in garbage time. “It’s something I’ve dreamed of my whole life, and so for it to become a realization is really special.”

Flyers: Host the New York Rangers on Wednesday night in the second half of a back-to-back for each team.

Capitals: Visit the Toronto Maple Leafs on Thursday night to kick off their five-game road trip.