Returning to Capital One Arena ‘definitely strange’ for Braden Holtby

Despite Braden Holtby making his return to Capital One Arena in a suit and tie due to a lower-body injury, Washington Capitals fans showed their love and appreciate for the Stanley Cup-winning goaltender.
Listen now to WTOP News WTOP.com | Alexa | Google Home | WTOP App | 103.5 FM

Despite Braden Holtby making his return to Capital One Arena in a suit and tie due to a lower-body injury, Washington Capitals fans showed their love and appreciate for the Stanley Cup-winning goaltender.

While the game was in a television timeout, the Capitals played a tribute video for Holtby. The fans chanted Holtby’s well into the resumption of the game and during an interview with Bally Sports Southwest, the 32-year-old called the experience ‘special.’

“It’s definetly strange being back to a place that you’ve been so many times on the other side,” Holtby said.

“This city is such a good hockey city; it’s amazing, the fans are incredible. They always treated me and my family so well. To get an appreciation like that, I wish I could turn it around on them somehow.”

Holtby was drafted by the franchise in 2008 and made his NHL debut in 2010 with the Capitals and would stay with the organization until 2020. During his ten-year stint in Washington, Holtby compiled a 282-122-46 record.

The former Washington goaltender also won the Vezina Trophy in 2016 as the league’s best goaltender and, in 2018, won the franchise’s first Stanley Cup. 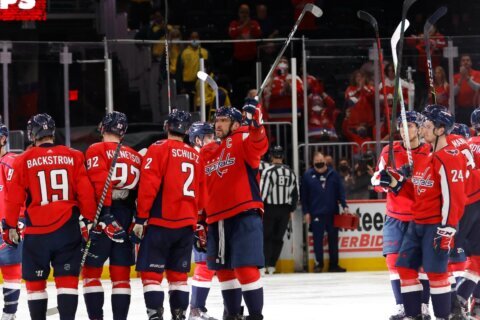