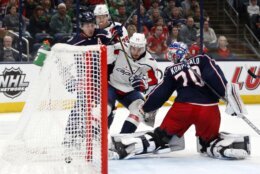 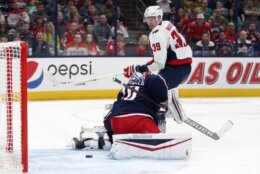 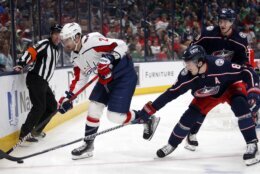 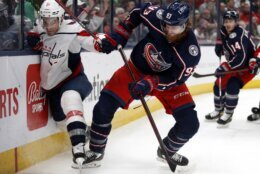 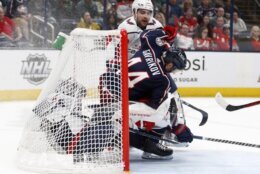 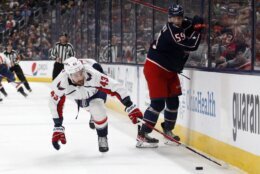 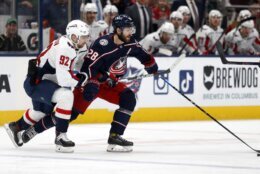 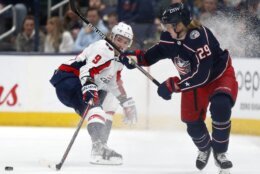 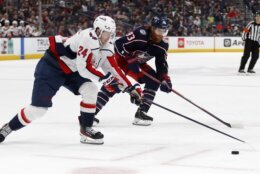 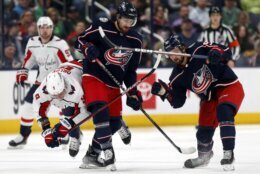 COLUMBUS, Ohio (AP) — Anthony Mantha scored twice, and Alex Ovechkin and Connor Sheary each had a goal and an assist as the Washington Capitals beat the Columbus Blue Jackets 7-2 Thursday night for their third straight win.

Martin Fehervary, Connor McMichael and Evgeny Kuznetsov also scored, and Nikolas Backstrom added two assists as Washington improved to 6-0-1 in its last seven games. Vitek Vanecek stopped 39 shots for the Capitals, who pulled one point behind Boston for the top wild card in the Eastern Conference and increased their lead over Columbus to 13 points for the second wild card.

“We knew they’re trying to catch us right now,” Mantha said. “We knew it was a four point game, even if there’s 20 games left. But we also knew they played last night, so we wanted to put pressure on them, put the puck in deep and just get on our forecheck.”

Oliver Bjorkstrand and Patrik Laine scored for the Blue Jackets, who scored twice on their own net and broke a three-game win streak. Joonas Korpisalo stopped six of nine shots before being replaced in the second period by Elvis Merzlikins, who finished with 20 saves.

“It was not our night — I can tell you that right now,” Blue Jackets coach Brad Larsen said. “I am a realist. A 7-2 game, you are thinking that is disaster, but our guys gave it tonight. It was a strange game — one of those nights.”

Mantha put Washington on the board at 4:29 of the first, beating Korpisalo between the pads on a breakaway. He earned his second goal of the night and put Washington up 2-0 off Korpisalo’s skate, as the goalie inadvertently guided a rebound into the net while backing into position at 12:20.

Fehervary’s goal at 1:20 of the second beat Korpisalo through the five-hole, making it 3-0 and ening his night,

Bjorkstrand pulled Columbus within two with his sixth power-play goal at 6:57, before Ovechkin took advantage of a Columbus penalty to extend the Capitals’ lead to 4-1 with a wrister from the left circle at 10:44. It was his team-leading 11th power-play goal.

“It was a different game,” Capitals coach Peter Laviolette said. ”They scored that goal less than four minutes into the third. Now the game’s back in question again, so to get the fifth one right away, get that three-goal lead back I thought was important. It’s way better than playing from behind. Playing from behind. you’re expending energy, you’re chasing the game, you have to be stressed in the system with what you’re trying to do because you’re pushing for a goal.”

Laine cut the lead to 4-2 at 1:47 of the third, tipping Zach Werenski’s shot from the blueline, but Washington went up 5-2 when McMichael was credited with the goal Dean Kukan scored into his own net as he tried to clear the puck at 4:15.

Columbus pulled Merzlikins for an extra skater with 12:48 left in the game and Sheary scored an empty netter seconds later. Kuznetsov made it 7-2 with a power-play goal at 9:03.

A LEAGUE OF HIS OWN

Ovechkin’s power-play goal extended his NHL all-time lead to 280. He now has six goals in his last eight games, extending his point streak to three games. His 38 goals this season tie him for fourth in the NHL.

Washington’s T.J. Oshie suffered a lower-body injury in the third period and did not return to the game.

Daniel Sprong’s assist on Fehervary’s goal was his first since Dec. 17 and came on his 25th birthday. Also blowing out candles Thursday was Blue Jackets defenseman Andrew Peeke, who turned 24.

Mantha has recorded five points (four goals, one assist) in his last five games. He returned to the Capitals’ lineup March 3 after shoulder surgery that cost him 45 games this season.

Voracek’s 41st assist of the season was his 31st primary, tying him for fourth this season in the NHL.

Kuznetsov’s goal extended his point streak to seven games. Werenski’s assist on Laine’s goal was his third straight game with a helper.

Brad Larsen: “You score twice on yourselves, it’s going to be tough to win that way.”

Capitals: At Carolina on Friday night.