Craig Smith scored 5:48 into the second overtime Wednesday night to give the Boston Bruins a 3-2 victory over the Washington Capitals and a 2-1 lead in their East Division first-round playoff series.
Listen now to WTOP News WTOP.com | Alexa | Google Home | WTOP App | 103.5 FM
(1/13) 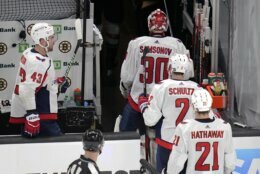 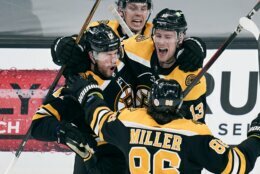 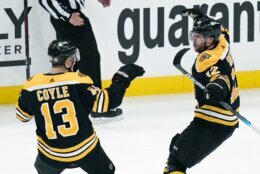 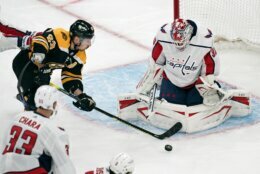 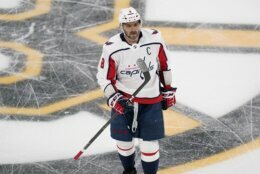 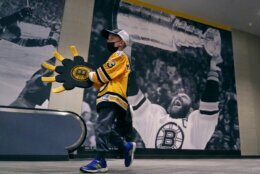 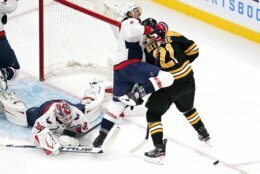 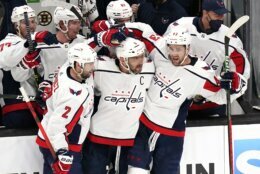 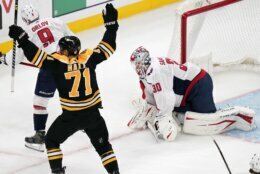 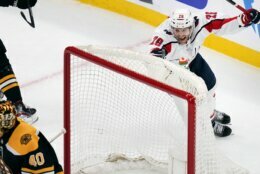 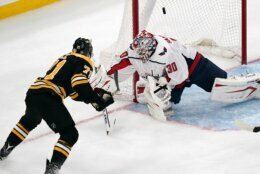 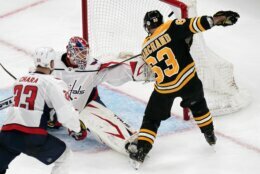 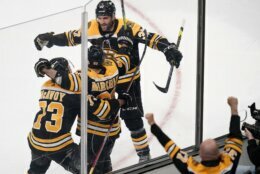 BOSTON (AP) — Craig Smith has a mantra that he pulled out after scoring the winning goal against Washington on Wednesday night: “I love winning, but I hate waiting.”

The Bruins forward took care of the first part after he’d had plenty of the second, scoring 25:48 into overtime to give Boston a 3-2 victory over the Capitals and a 2-1 lead in their East Division first-round playoff series.

Smith outraced Washington defenseman Justin Schultz to a puck that Capitals goalie Ilya Samsonov left behind his net. The Bruins forward swept it around before Samsonov could get back in position to end the third straight overtime game in the series.

“I just tried to jump on it and see if I could create a little bit of a turnover there. They gave me just enough time,” said Smith, who also had an assist. “It just worked out. He was still out of his net trying to get back in, and I just snuck it in there.”

Brad Marchand and Taylor Hall also scored for Boston, and Tuukka Rask stopped 35 shots. The Bruins fell behind 1-0 and 2-1 before twice tying it, taking their only lead on Smith’s game-winner.

“We had a lot of good looks and then obviously got a break at the end,” Boston coach Bruce Cassidy said. “It’s a second-effort league and that’s how you score. That’s the way goals go in when goalies are on. You need to get two or three whacks at it.”

It was the 11th straight one-goal playoff game between them since 1998.

Game 4 is Friday night in Boston.

“I would imagine that the next game is probably going to be the same type of game,” Capitals coach Peter Laviolette said. “You hope at the end of the night your number on the scoreboard is bigger than the opponent’s.”

Alex Ovechkin scored his 800th combined regular season and postseason goal, and Nic Dowd returned from a slap shot off the knee to add a goal for Washington. Samsonov returned from the COVID-19 list to make his playoff debut, stopping 40 shots for Washington, which lost the home-ice advantage after splitting the first two games at home.

“I think we’ve got to be hungrier, and we all know that,” Washington defenseman John Carlson said. “It’s going to be our best effort next game.”

Dowd had to limp off the ice and head to the dressing room after blocking a shot with his right knee midway through the second period. He was back and charging the net when Garnet Hathaway kept the puck in at the blue line and fed him for the goal that made it 2-1 with less than two minutes to go in the period.

But it was Dowd who was called for high-sticking to set up the power play that led to Marchand’s tying goal. The puck bounced from Charlie McAvoy to Patrice Bergeron before Marchand swiped it into the net with 8:28 left in regulation to make it 2-2.

Marchand, who had two penalties in Game 2 before scoring the winner just 39 seconds into overtime, was whistled for the penalty that led to Ovechkin’s goal after the Bruins dominated the scoreless first period.

Boston still had a 15-9 advantage in shots when Ovechkin scored on the power play with 11:39 left in the second. It was his first goal of the series but the 70th of his postseason career, giving him a total of 800 for the regular season and playoffs.

That lead lasted less than a minute before Smith slid the puck to Hall in the slot. After some stickhandling to get Samsonov out of position, he lofted it over the goalie to tie it at 1.

The second overtime started out with a slew of injuries.

First, David Pastrnak went head- and neck-first into the boards after he was stopped on a breakaway; he needed a whistle and help from the training staff to get back to his feet. A few minutes later, linesman Devin Berg had his skates swept out from under him and went down hard; he remained in the game.

It was no surprise when the Bruins fans made oft-suspended Capitals forward Tom Wilson feel unwelcome, occasionally with a vulgar chant.

But the Boston crowd, which was at 25% capacity due to COVID-19 restrictions, also jeered former Bruins captain Zdeno Chara, who was appearing at the TD Garden as a postseason opponent for the first time in his career.

The 44-year-old Chara played 14 years in a Bruins sweater and led Boston to the 2011 Stanley Cup title, but he left as a free agent last offseason and signed with Washington, which promised him a full-time role. He played 20:04 minutes and was a plus-1.

Samsonov went 13-4-1 in the regular season but had not played since May 1, missing seven games on the COVID list. He was only cleared to return Sunday. Vitek Vanecek started Game 1, but was hurt in the first period and Craig Anderson picked up the win; Anderson started Game 2 and took the overtime loss.

Washington is just the second team in NHL history to start three different goalies in its first three playoff games, joining the 1986 Winnipeg Jets. It’s only the fourth time a team opened any playoff round with a different starting goalie in each of the first three games, according to NHL Stats.