David Pastrnak and Charlie Coyle scored 34 seconds apart to break the game open early in the third period, and Tuukka Rask stopped 19 shots to lead Boston to a 4-1 victory over the Washington Capitals on Friday night and give the Bruins a 3-1 lead in their first-round East Division playoff series.
Listen now to WTOP News WTOP.com | Alexa | Google Home | WTOP App | 103.5 FM
(1/8) 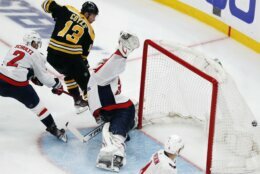 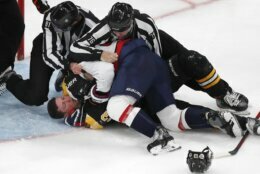 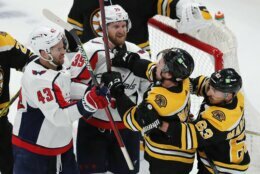 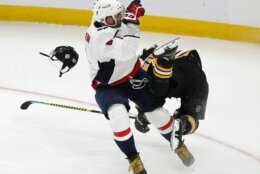 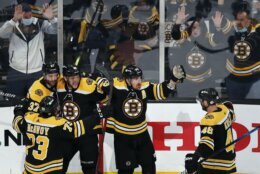 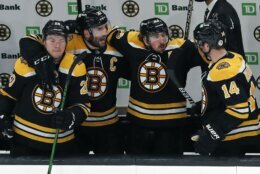 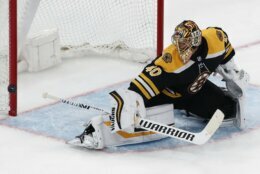 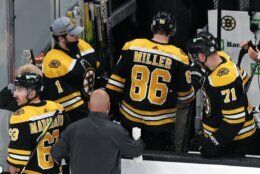 BOSTON (AP) — The Boston Bruins had to cut short one goal celebration to skate to the defense of a teammate, who was taking some abuse from oft-suspended Capitals forward Tom Wilson.

They didn’t fight back.

After 15 periods of neck-and-neck hockey, the Bruins finally broke one open in their playoff series against Washington on Friday night, getting goals from David Pastrnak and Charlie Coyle 34 seconds apart early in the third period to win 4-1 and send the Capitals to the brink of elimination.

Brad Marchand and Matt Grzelcyk added power-play goals for Boston, which was 3 for 5 with the man advantage.

Tuukka Rask stopped 19 shots for his 54th playoff victory, breaking the Bruins franchise record that was set by Hall of Famer Gerry Cheevers in 1980. Boston took a 3-1 lead in the best-of-seven series and can advance with a victory in Game 5 in Washington on Sunday.

“It doesn’t really matter who is the hero every night,” said Pastrnak, who netted his first goal of the series and was originally credited for Marchand’s goal. “As long as you win, you feel amazing.”

After three straight overtime games in which neither team managed as much as a two-goal lead, the Bruins made it 2-0 on Pastrnak’s power-play goal 29 seconds into the third. The 25% capacity crowd had barely settled down before Jake DeBrusk’s shot bounced high off the glass behind Ilya Samsonov and landed in the crease for Coyle to poke it into the net.

Behind the play, Wilson put a few extra shots on Nick Ritchie — one of many scuffles in the game. For the second straight game, Rask was the target of a Capitals hit; Bruins defenseman Kevan Miller was sent to the hospital by a high hit from Dmitry Orlov.

“Their guy left his feet, borderline late, and drove right under his chin,” said Bruins coach Bruce Cassidy, who added that Miller left the rink for the hospital. “It’s unfortunate for Kevan, but we’ll see how he is.”

Alex Ovechkin made it 3-1 with 15 minutes left in the game when his shot was deflected into the net by Bruins defenseman Brandon Carlo. It was Ovechkin’s first goal of the 2021 playoffs and the 71st of his postseason career, moving him past Steve Yzerman and into a tie with Bryan Trottier for 16th most in NHL history.

Samsonov, whose overtime turnover in his playoff debut helped Boston claim Game 3, made 33 saves for Washington. He struggled to hold onto his stick — losing it three times in the second period — and had to skate off a knee injury at one point but remained in the game.

Samsonov was pulled for much of the last three minutes, but the Capitals couldn’t get any closer despite having a 6-on-4 advantage for much of it.

“Just think, we didn’t really bring it today,” forward Lars Eller said. “We were off. Now we’ve got 48 hours to regroup here and I want to see a different team in Game 5 at home. I believe we can do that. I’ve seen it before.”

The Capitals went almost 20 minutes without a shot on goal in the middle of the game and were outshot 37-20 in all. But it was still scoreless until Marchand tipped in Pastrnak’s shot on the power play with 12 minutes left in the second.

“They scored power-play goals tonight,” Capitals coach Peter Laviolette said. “Some of the penalties I don’t like, some of them are part of the game. It’s physical out there. At the end of the day, there’s got to be discipline.”

Miller appeared to bang his head against the ice when he fell. Orlov was given a double minor for roughing, and the Bruins finally broke through just 33 seconds into the penalty.

“Millsie’s a huge part of our team; we wanted to do that for him,” Grzelcyk said. “We wanted to make sure to do it the right way, on the scoreboard, and not take stupid penalties.”

The Bruins announced after the end of the period that Miller would not return and was taken to the hospital for “scans and evaluation.”