This Date in Capitals History (March 25): From a rare blowout win in the 1970s, to milestone goals from John Carlson and Alex Ovechkin, join us for a stroll down memory lane
Listen now to WTOP News WTOP.com | Alexa | Google Home | WTOP App | 103.5 FM

March 25, 1977: Ace Bailey and Bill Collins had two goals each and Guy Charron had the eventual game-winning goal as the Capitals beat the New York Rangers 7-2 in Landover.

The Capitals exploded for five goals in a span of 9:49 in the second period – at the time, the fastest five goals scored in franchise history.

March 25, 2008: Alex Ovechkin set a franchise record with his 61st goal of the season as the Capitals went on to beat the Carolina Hurricanes 3-2 in a shootout. Ovechkin passed Dennis Maruk, whose previous franchise mark of 60 goals in a single campaign stood for 26 years.

Ovechkin would finish the 2007-08 season with League-best totals of 65 goals and 112 points as the Capitals returned to the Stanley Cup Playoffs for the first time in five years.

March 25, 2010: In his 18th career NHL game, defenseman John Carlson beat Carolina goalie Manny Legace for his first career NHL goal. Jason Chimera and John Erskine drew the assists on Carlson’s first NHL tally, which tied the score 2-2 at 2:12 of the third period. The Hurricanes would eventually win 3-2 in a shootout.

Carlson has since emerged as the Capitals all-time scoring leader among defensemen (478 points). In December, he became the fifth defenseman to score 100 goals with the Capitals, joining Kevin Hatcher (149), Sergei Gonchar (144), Mike Green (113) and Calle Johansson (113).

March 25, 2014: Evgeny Kuznetsov picked a good time to score his first career NHL goal. With the Capitals trying to remain in the Eastern Conference playoff hunt, Kuznetsov beat Kings goalie Jonathan Quick in the final minute of regulation to tie the score 4-4. Kuznetsov converted on a rebound opportunity after Ovechkin took the original shot.

The Capitals ultimately fell 5-4 in a shootout, but Kuznetsov’s first career goal helped Washington at least secure what at the time was a valuable standings point.

March 25, 2017: Alex Ovechkin secured his 12th consecutive 30-goal season and Daniel Winnik had a pair of goals, including the game winner, as the Capitals beat the Arizona Coyotes 4-1 at Verizon Center.

The win capped off a perfect 3-0 homestand for the Capitals, who also established a franchise record with their 31st home win of the season. The Capitals would finish the 2016-17 campaign with a League-best 32-7-2 record at home, en route to their second consecutive Presidents’ Trophy.

Ovechkin joined Mike Gartner and Wayne Gretzky as the only players in League history to begin their NHL career with at least 12 consecutive 30-goal campaigns.

“It’s very huge, obviously,” Ovechkin said at the time. “It’s nice to be in history. But more history to come.”

More Washington Capitals history can be found in ‘100 Things Capitals Fans Should Know and Do Before They Die.’ 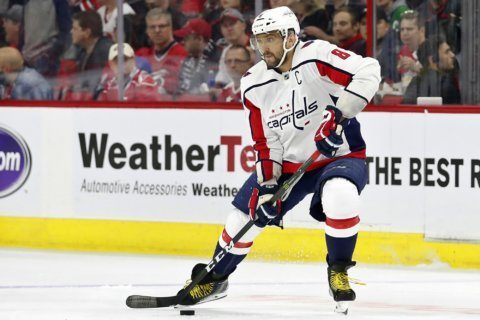