The Capitals have two days to stew over their most lopsided playoff defeat in nearly six years. How can they rebound in Game 4 against Carolina?
Listen now to WTOP News WTOP.com | Alexa | Google Home | WTOP App | 103.5 FM

Besides the typical bumps and bruises that tend to pile this time of year, the Washington Capitals seemingly avoided any serious injuries Monday night in Raleigh, North Carolina. So, there’s that.

Otherwise, the Capitals’ 5-0 Game 3 defeat to the Carolina Hurricanes was about as bad it gets.

“Everything can be better,” said Caps center Nicklas Backstrom. “We didn’t execute anything.”

Credit the Hurricanes, who played a nearly flawless game in front of a raucous crowd at PNC Arena. Carolina was hosting its first postseason game since 2009, and the Hurricanes dictated play throughout.

Though the Capitals maintain a 2-1 series lead, Carolina has come as advertised in the series. The Hurricanes are an aggressively forechecking bunch that can make life miserable for the Capitals in their own zone.

“They can be annoying,” Braden Holtby said before the series started.

In Game 3, the Hurricanes were buzzing. They came in waves and applied constant pressure inside the Washington zone.

If the Capitals are to rebound in Game 4 on Thursday, they must find a way to better handle Carolina’s pressure. It wouldn’t hurt to establish some of their own, too. During one 45-minute stretch in Game 3, the Hurricanes out-shot the Capitals 37-4.

“The pressure that they put on you, they force you to make mistakes,” head coach Todd Reirden said Tuesday from the team hotel.

“When we’re able to execute versus that pressure, then we’ll get some chances going the opposite direction and be able to establish our own forecheck where we can force them to go back under a little bit more pressure than they have thus far.”

The Capitals were also guilty of several defensive-zone turnovers in Game 3, but Reirden downplayed the fluid situation with defensive pairings having much to do with it. A late-season injury to the steady Michal Kempny has seen both Nick Jensen and Christian Djoos move up the depth chart, while righty John Carlson has had to primarily play on the left side.

“I think whatever side of the ice that you’re on, if you pass the puck directly to the other team, that’s probably not a good idea,” Reirden said. “So, we’re going to try to eliminate some of those and to say that it had something to do with something other than execution is not accurate.”

The Capitals are also seeking better execution on both special teams units after going 0-for-4 on the power play in Game 3 while conceding two power-play goals against.

Dating back to the second period of Game 1, the Capitals have failed to convert on 10 straight power-play opportunities. The Hurricanes have three power-play goals in the last four periods.

“I would say that when you lose the special teams in two of three games, that’s not a great recipe for success,” Reirden said. “That’s always on our checklist of important things and that’s something we can improve on.”

Reirden suggested that the Hurricanes penalty kill has been well prepared the past couple of games and that the Capitals must adjust accordingly. Carolina has been particularly aggressive on the PK, taking away time and space and forcing Washington into quick decisions.

“They’ve done a good job with their pressure,” Reirden said. “Now it’s up to us to probably look at how we can generate a few more shot opportunities, a little bit cleaner entries and do a better job recovering pucks.”

Reirden and the Capitals are also hopeful that they can draw on their experiences from last spring when they showed a knack for rebounding from bad losses or undesired outcomes. While the blowout nature of the Game 3 defeat makes it tough to stomach, it’s only one loss.

Last year, with much of the same core, the Capitals rallied from series deficits in all four rounds and twice fought off elimination in the Eastern Conference Final. A singular defeat shouldn’t necessarily spell trouble for the defending champs.

“I think we learned from last year,” Alex Ovechkin said. “We’ve been in bad situations…We stick together, game by game. Win or lose, we forget it and move forward.”

Added Reirden: “You rely on your leadership group and ours is, I feel, the strongest in the league. They have been all year. I expect them to be a part of our response on Thursday. We’ve been good since the All-Star break at our games after a loss and I wouldn’t expect anything less.” 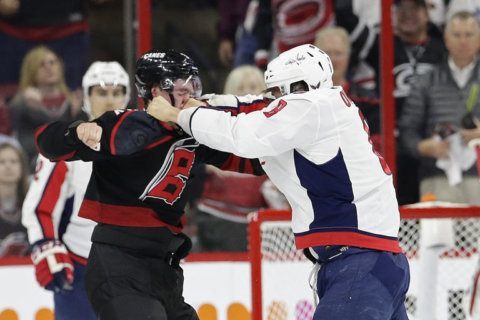 Svechnikov in concussion protocol after fight with Ovechkin

Capitals fall to Hurricanes 5-0 in Game 3