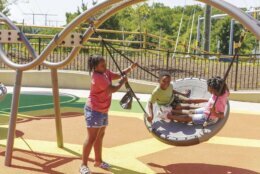 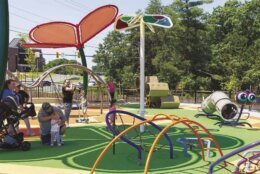 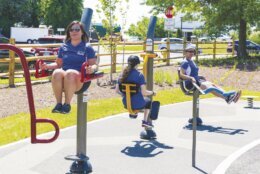 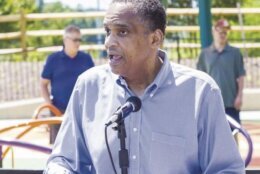 An underused commuter parking lot on Minnieville Road, with weeds sprouting through the cracked asphalt, has been converted into the county’s first universally accessible playground and green space.

In fact, the 2½-acre Harbor Drive Wellness Park park is filled with firsts, said Seth Hendler-Voss, director of the county’s Department of Parks, Recreation and Tourism, during an opening ceremony earlier this month.

In addition to featuring the first universal playground in the county’s system, the park also has the first public pollinator garden, which will benefit butterflies, insects and hummingbirds, Hendler-Vos said. It’s also the county’s first collaboration with Kaiser Permanente, which is building a new medical center nearby and donated more than $200,000 to the $1.5 million project.

“We couldn’t believe what we found – we knew we had to do something about it,” Anderson noted during the June 4 opening. She said she and the district staff drove around to look at possible spots, and the commuter lot became a prime candidate because no one was parking there.

After the county obtained the property from the Virginia Department of Transportation, work began to convert the space into something that could benefit the community’s mental, spiritual, and physical health and also be good for the environment.

Hendler-Voss said the parks staff took several trips to Washington to look at community gardens and urban parks and to get a vision for what was possible.

In community meetings, Anderson said neighbors requested a universal playground that children with disabilities could enjoy, and they also wanted green space for group programming, such as yoga and calisthenics.

Kenny Boddye, the current Occoquan District supervisor, said the transformation from empty asphalt to a vibrant neighborhood space was incredible.

“This park stands as an illustration of so many of our shared values not only here in the Occoquan District, but also across Prince William,” Boddye said. “We are moving toward being a community in which equity isn’t simply an aspirational vision, but a real life experience for our residents, regardless of their ability level.”

Boddye said his son has mobility issues. “I can tell you there are so many families able to utilize this park because of the hard work that has been done here. … While this is designated as a neighborhood park, we are already seeing people come here from far and wide to enjoy its unique offerings.”

David Harrington, senior director for community and stakeholder engagement with Kaiser Permanente, said Kaiser was delighted to play a part in creating the space, just a mile from its new Caton Hill Medical Center, set to open in September. A mile-long loop trail connects the park and the center, and includes several exercise stations.

“Congratulations for putting together something so beneficial to the community,” Harrington said. “This is going to be a tremendous value to the community for years to come, and we are happy to be part of this wellness engagement that you have started.”

Report: VDOT does not have enough contractors to help in heavy snow removal

Group of Va. Republicans gets ready to work on bill limiting abortion