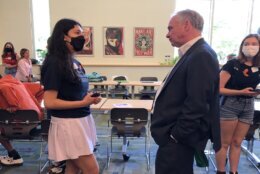 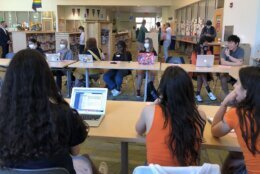 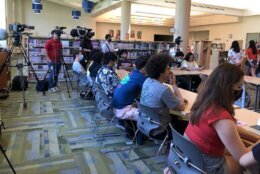 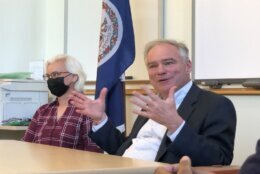 After the recent school shooting in Uvalde, Texas, juniors and seniors at Wakefield High School in Arlington, Virginia, met with U.S. Sen. Tim Kaine to ask how they can keep their school safe from guns.

“You guys probably have to have safety drills and shooter drills and things like that … we didn’t have that when I was a kid,” Kaine said at Monday’s meeting.

He said the last time he met with students at this high school was after the Parkland shooting in Florida.

“It’s sad to come back three years later … and to come back with tragedies mounting,” Kaine said. “I wish the Virginia Tech shooting was the worst shooting in our history. I wish there had not been one since then.”

One of the biggest questions from the group was what, as high schoolers, could they do to stop school shootings. Kaine said use your voices.

“I do want to preach the message of don’t give up,” Kaine said. “Changes that were made right after Parkland, they were modest but they wouldn’t have been made if the students hadn’t protested.”

“Those are the only pieces of federal legislation that improved gun safety that had been done in the entire time that I’ve been in the Senate. And it was because of students,” he added.

As a part of the meeting, students gave Kaine messages to take back to the U.S. Senate.

Kaine later told reporters the most significant message he received: “my life is worth more than a gun.”

In addition to gun violence, Kaine told the teenagers that there’s a major shortage of mental health services in the U.S. right now.

“While a lot of this gun violence is because of guns, a lot of it is also because of mental health,” he said.

“Maybe by public service, loan forgiveness or incentives … we need to broaden the workforce of mental health services,” Kaine said.