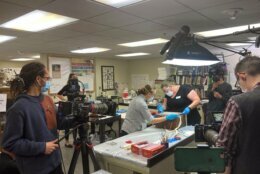 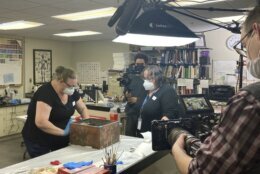 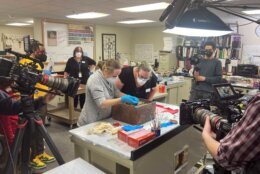 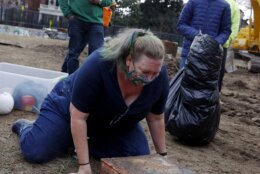 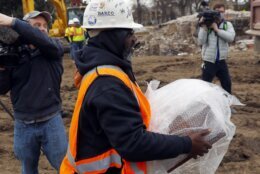 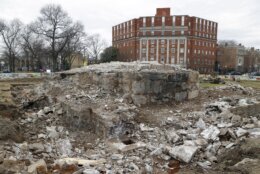 RICHMOND, Va. (AP) — Conservation experts in Virginia’s capital pulled books, money, ammunition, documents and other artifacts Tuesday from a long-sought-after time capsule found in the remnants of a pedestal that once held a statue of Confederate Gen. Robert E. Lee.

Over the course of about two hours, the team sliced open the 36-pound copper box and meticulously pried apart and documented the damp contents. The box had been tucked in a foundation cornerstone of the massive — and now mostly deconstructed — Richmond monument since 1887.

The time capsule had drawn substantial interest, both because it proved to be elusive during an earlier search and because historical records had led to some speculation it might contain a rare photo of President Abraham Lincoln after his death. Ultimately, such a photo was not found.

The conservation team was able to identify many of the items immediately as they were pulled from the box, though some materials were warped from water damage and required further study. Experts were on hand to triage the artifacts.

“They were more waterlogged than we had hoped but not as bad as it could have been,” said Kate Ridgway, the lead conservator for the Virginia Department of Historic Resources.

The time capsule had been found a day earlier — buried and sitting in water — by workers wrapping up the removal of the Lee statue pedestal.

Virginia Gov. Ralph Northam ordered the enormous equestrian statue of Lee removed in 2020, amid the global protest movement sparked by the police killing of George Floyd. Litigation pushed back his plans, and the statue was not removed until September, after a court cleared the way.

Contemporaneous news accounts from the late 1800s detailed the placement of the box in the cornerstone of the pedestal, but a lengthy search during the statue removal came up empty.

Earlier this month, Northam ordered the pedestal removed as well, and crews working on the project again started to search for the artifact. A different time capsule was discovered two weeks ago, generating excitement, but hours of painstaking and ultimately anti-climactic examination suggested that artifact was placed by someone else, perhaps someone involved with the construction.

Ridgway said the measurements and copper material of the box opened Tuesday matched historical accounts. As the contents inside were unpacked, they largely lined up with the items listed in a newspaper article from the time.

One tidbit in that newspaper article had led to some conjecture that the capsule might contain a historically significant photo of Lincoln. It listed among the contents a “picture of Lincoln lying in his coffin.”

On Tuesday, conservators found a printed image from an 1865 issue of Harper’s Weekly that they said seemed to show a figure grieving over Lincoln’s grave — but it was not the much-anticipated photo.

“It was not an original. It was perhaps taken from a photograph, but it is an engraving,” said Sue Donovan, conservator for special collections at the University of Virginia Library.

The contents of the tightly packed box had expanded from the dampness and stuck together, making unpacking difficult, so conservators decided to relieve pressure by cutting down one side.

“Not ideal, but it’s the way it is,” Ridgway said.

After Ridgway and other team members meticulously extracted each object, other conservators would cart the pieces to the back of the lab for further study and cataloging. The team made sure to photograph each object before manipulating it.

Along with several waterlogged books, pamphlets and newspapers, the box contained an envelope of Confederate money, which conservators carefully separated, and two carved artifacts — a Masonic symbol and a Confederate flag said to have be made from the tree that grew over Gen. Stonewall Jackson’s original grave.

Conservators also pulled buttons, coins and Minié balls, a type of bullet used in the Civil War, from the box. A bomb squad had checked the capsule Monday, partly to make sure there was no live ammunition inside.

Ridgway told reporters after the box had been emptied that there was some question about whether calling the vessel a time capsule was the most accurate terminology, as it did not appear to have a definitive date when it was expected to have been opened.

“A cornerstone box is probably more accurate,” she said.

No inscription could be seen on the box’s interior or exterior, though Ridgway said it was possible that any such carving could have corroded away with time.

The Lee monument used to be part of a collection of Confederate statuary that dotted historic Monument Avenue in Richmond, which was capital of the Confederacy for most of the Civil War. The other Confederate statues, which were the property of the city, were removed last year.