1 severely injured in high speed crash, fire on I-95 near Dale City 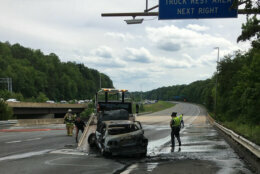 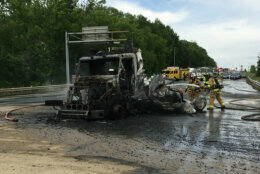 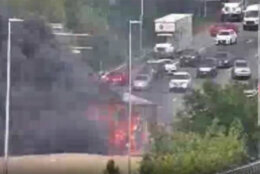 One person suffered burns following a multivehicle crash and fire on Interstate 95 Tuesday, which shut down southbound lanes between Dale City and Dumfries in Virginia for over four hours. According to Virginia State Police, a Honda sedan was “weaving in and out of traffic” at high speed.

After making a sudden lane change, the sedan was run off the interstate, hit a guardrail, re-entered the travel lanes, and hit by a tractor-trailer. Both vehicles caught fire on impact.

The Honda driver, 21, suffered life-threatening injuries and was flown to The Burn Center at Medstar in D.C., Virginia State Police spokeswoman Corinne Geller said in an email. The tractor-trailer’s driver was not injured in the crash, and the vehicle was empty.

Police said possible charges are pending as the investigation is ongoing.

Hundreds of people stuck between the diversion point at exit 156 and the crash — including at the rest stop — were led out of the way by police on one lane. By 6:30 p.m. Tuesday, the backups extended for more than 12 miles.

It took a long time to clear the road because of the investigation and the damage. “You can’t just tow a tractor-trailer that is that badly burned,” WTOP Traffic reporter Dave Dildine said. “The recovery is complicated and time-consuming.”

Traffic was diverted onto Dale Boulevard, Dildine said, and to make matters worse there was a crash there, as well, for some time. Bailing out at Route 1 was “not an original idea,” Dildine said, as drivers flocked there in hopes of avoiding traffic.

Northbound I-95 lanes remained open after the crash, but there were serious rubbernecking delays.

Below are earlier scenes from the crash.

#Chopper4 Video: One single right lane now gets by the tractor trailer fire cleanup on I-95 southbound prior to #Dumfries Road in Prince William County, ~10 mile delay and growing, use the express lanes or Rt. 1 #vatraffic @nbcwashington #BreakingNews pic.twitter.com/JMqmX0mbKo

Violent crash on I-95 in Dale City. The southbound lanes of the interstate are closed. The @VAExpressLanes stopped for medevac. Stay with 103.5 FM. pic.twitter.com/J6ulfWltRh