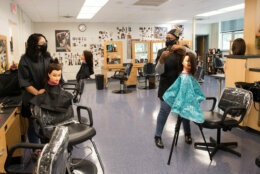 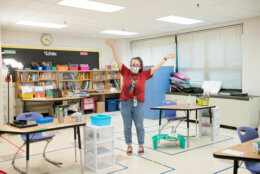 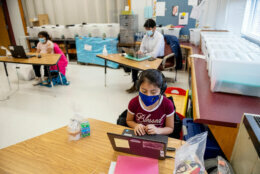 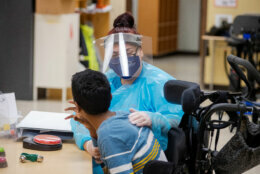 Some students in two of Virginia’s largest school systems — Fairfax and Loudoun counties — are returning to classrooms Tuesday. For some, it’s the first time since a December 2020 spike in COVID-19 cases that sent all students home to learn, and others for the first time since the coronavirus pandemic began last March.

In Fairfax County, the largest school district in the commonwealth, several small groups of students will be back in school buildings.

Pre-kindergarten students through grade 12 students with special needs return to schools four days per week. Students in several career-oriented programs will be in school buildings one or two days per week.

In Loudoun County, students in grades 3 through 5 whose families chose hybrid learning in a November 2020 survey will be reunited with teachers and classmates in-person, twice weekly.

“It was like the first day of school. I saw one child hugging his dad, with that separation anxiety a lot of younger children have,” Morse said. “I also saw a lot of children skipping into the school, socially distanced from the rest of their bus riders — I think under their masks they were probably smiling.”

In both Fairfax and Loudoun counties, families that chose 100% distance learning will continue learning from home for the duration of the school year.

Families in Loudoun County were advised last week by Interim Superintendent Scott Ziegler of safety protocols intended to prevent the spread of COVID-19 within the school system. Parents are expected to complete an online symptoms checker daily, before their child walks to school, rides the bus or is dropped off.

Loudoun, and most school systems in Northern Virginia, has prevented widespread outbreaks within schools by following physical distancing, mask and hand-washing guidance from the U.S. Centers for Disease Control and Prevention, as well as the Virginia Department of Health.

Morse agreed with public health officials who believe children are less likely to catch and spread coronavirus in school than in the community, outside their home.

“I spoke to one of the teachers — they had eight students in the class on Tuesday, and they’ll have eight on alternative days. So, that provides us with the opportunity to maintain social distancing of six feet, combined with the mask wearing, hand-washing and thermal sensors that check children’s temperatures as they come into the school,” Morse said.

In recent weeks, as the number of coronavirus cases in Virginia have decreased, coinciding with priority vaccinations of teachers — including in Fairfax and Loudoun counties — and pressure from Gov. Ralph Northam to offer some form of in-person learning by mid-March, all Northern Virginia school districts have set return-to-school target dates.

In Loudoun County, middle and high schoolers whose parents previously opted in to the hybrid model will return to classrooms two days per week by March 3.

In Fairfax, the plan is to return reintroduce smaller groups of students each week, with all grades offering hybrid learning by March 16.

In Maryland, Frederick County begins hybrid learning Tuesday. Students will be in class two days a week, but not all students will be back at the same time.

Montgomery, Howard and Anne Arundel counties will bring students back for hybrid learning on March 1.