Acornucopia: Call for acorns in Virginia leads to record haul

An estimated 3,500 pounds of acorns — nearly 2 tons — were dropped off at the Virginia Department of Forestry offices in about a month's time, according to one official.
Listen now to WTOP News WTOP.com | Alexa | Google Home | WTOP App | 103.5 FM

When officials in Virginia called on residents to gather acorns and donate them to the state nursery earlier this fall, you could say people went a little nuts.

An estimated 3,500 pounds of acorns — nearly 2 tons — were dropped off at the Virginia Department of Forestry offices in about a month’s time, according to Jim McGlone, an urban forest conservationist with the department.

That’s a record haul, said McGlone, who has worked for the department since 2006.

“I got more calls this year than I have ever gotten before,” he said.

The department is storing the nuts for now, but they’ll make their way to a state nursery in Augusta County, Virginia, where they’ll be planted and then eventually used to help grow new forests.

So, what was behind this year’s record-breaking haul?

“A lot of the calls I got were from people who saw it on the WTOP Facebook page,” he said.

“It was what we call a masting year,” McGlone said. “Oaks tend to go through cycles where some years they produce a lot of nuts, and some years they don’t produce many at all. And this happened to be an up year, so it was easy for people to collect the nuts.”

The acorn donation program also turned into an “opportu-nutty” for impromptu science lessons. McGlone said he received a lot of calls from teachers who were collecting the nuts with their students.

It turns out collecting acorns lines up with Virginia’s standardized teaching curriculum called Standards of Learning, or SOLs. There’s a whole section on Virginia’s nut-ural resources.

If you wanted to donate acorns and missed the cutoff period this year, nut to fear: The department takes donated acorns every late summer and early fall. 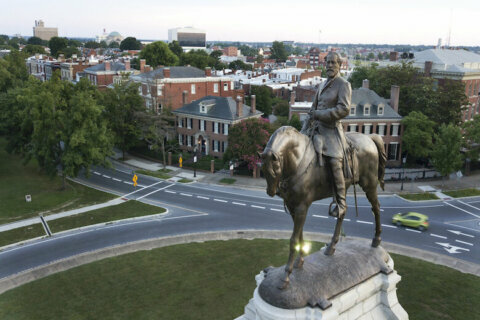